Savoring the babyhood I missed the first time around 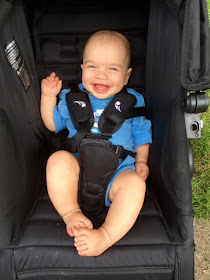 I am in awe of Ben every day. Not just because, at nearly nine months old, he's particularly chubalicious and sweet. Not just because some days, I still can't believe we were lucky enough to have another kid. It's also because I am amazed by all the baby things he is doing that Max didn't at his age. No movements came easy to Max, other than smiling; the cerebral palsy made his muscles stiff and uncoordinated.

I don't recall being this wowed by Sabrina's development. Perhaps time has faded those memories. I'm definitely around Ben more, as I'm not working full-time right now. And maybe I'm extra-attentive to everything because I know Ben is our last child. Heck, maybe I'm no longer distracted by the volcanic spit-up, which has pretty much stopped. Whatever it is, I am regularly thankful for Ben's accomplishments.

He can sit up unassisted, without a physical therapist holding his torso upright and doing exercises with him to strengthen his core. 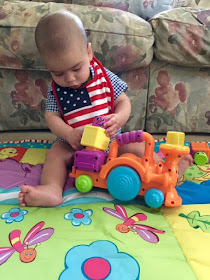 He can open both hands, all the way; they are not tight and fisted.

He can grasp a spoon, blocks, board books and toys, without an occupational therapist folding his fingers around them and showing him how.

He can hold objects with two hands at once, and move them from hand to hand.

He can use his pointer finger to touch things. 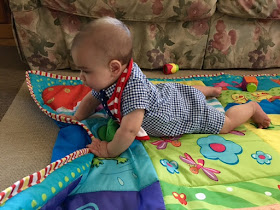 He can prop himself up on his hands.

He can rock back and forth on his hands and knees, with no therapist crouched over and positioning him into place. I can still vividly recall Max's Early Intervention therapist, Mindy, doing that.

He can say "Da da da!" and b's and m's and other sounds that speech therapists tried so hard to coax out of Max.

He can babble. When I'm with him in the car and hear him in the back seat, I think of the silent drives with Max and how I hoped so badly to hear him babbling. 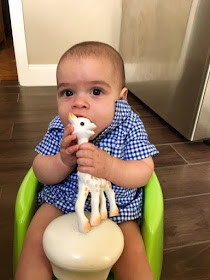 He can nibble on toys, one of the ways babies explore the world, unless yours has sensory issues.

He can raise his arms up when he wants me to hold him, which makes me swoon every time.

Max eventually did a lot of these things. He was progressing on his own timeline, and nobody else's. Still, the desperation, anxiety and loss that consumed me during his first year is not something my mind or heart have forgotten.

I feel guilty at times for relishing Ben's progress; it doesn't seem fair to the baby Max was. It's no reflection on Max, I realize when I think it through, but rather the residual of my mourning during that time in his life. It's hard not to feel that you were denied the parenthood you expected when your first baby had major developmental delays, just as it's impossible not to marvel at the movements, gestures and sounds that come so easily to your other child.

I have lots of awe for Max, too. I take nothing that he does for granted. The progress may be more spaced out these days, yet here are plenty of random moments when I consider how far he's come and feel grateful. Yesterday, when the two of us got home from a supermarket run, I scooted into the house ahead of Max to put down the heavy packages. I turned around to go back out and get him only I didn't need to. Through the glass in the door, I watched Max carefully walk up our front stairs. And I felt lucky. So very lucky. 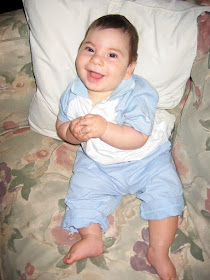