How wrong were the doctors about your child? 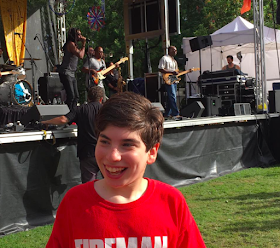 "We were told that my son would never sit upright. Now he walks, is really smart & sociable," read the tweet. It was in response to the video I put up about Max learning to tap dance.

I knew just what she meant. We called the pediatric neurologist and neonatologist at the hospital where Max was born Dr. Doom and Dr. Gloom. They only told us the worst about Max: That he might never walk or talk, and that he could have intellectual disability and hearing and vision problems. At one point, the neurologist told us we could sign a Do Not Resuscitate.

I've said it so many times: If only those NICU doctors could see Max now.

Technically, they weren't wrong about some stuff. He got cerebral palsy. He has intellectual disability. He doesn't talk the way a lot of people do.

But mostly, they were wrong.

Wrong, ethically, because they didn't give us a shred of hope. There was a young resident who talked to us about the plasticity of the brain—how new growth could spring up around the damage. He was our only consolation.

And those doctors were wrong because Max did go on to walk—on his own timeline, at age three. And Max can articulate words. And his vision and hearing are fine. And he has plenty of brightness and smarts, especially EI (Emotional Intelligence).

Not long ago, I read a letter that a mom of a little girl with Down syndrome wrote to the prenatal specialist who'd suggested that she abort her. As Courtney Baker posted on the Parker Myles Facebook page,

I'm not angry. I'm not bitter. I'm really just sad. I'm sad the tiny beating hearts you see every day don't fill you with perpetual awe.... I'm sad you were so very wrong to say a baby with Down syndrome would decrease our quality of life. And I'm heartbroken you might have said that to a mommy even today. But I'm mostly sad you'll never have the privilege of knowing my daughter, Emersyn... She's given us a purpose and a joy that is impossible to express. She's given us bigger smiles, more laughter and sweeter kisses than we've ever known. She's opened our eyes to true beauty and pure love.

Those NICU doctors were wrong in one other key way: They were wrong not to tell us that we would adore and love Max, no matter what. That he would bring us so much happiness and pride. That even if he wasn't the child we'd dreamed of, he would be a great boy we could have never imagined.