The best way we see the progress 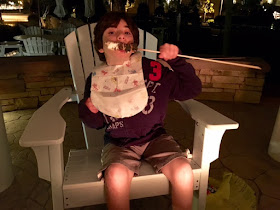 Back when Max was little, I hyper-focused on what he was and wasn't accomplishing. I watched him like a hawk, hoping to see a new movement, hear a new sound, feel his stiff hands loosening up. I was a walking ball of anxiety.

If someone had told me there would come a day when I would accept his abilities as they were, and not stress about his progress, I wouldn't have believed it.

That day is now.

To be sure, I still hope for all the progress with speech (oh, to hear him say a "b"), his arm movements, his cognition, his life skills, everything. But I no longer ache about when they will happen, and I no longer mourn what's not happening soon enough or fast enough.

Progress comes more randomly now, little geysers that shoot up and delight us. Like when Max said Ben's name very clearly recently. Or when he cleaned his own face. Or last week, when his wonderful home OT got him to hold both arms behind his back, a movement that does not come naturally to him and that I've never before seen him do.

The main way I see the progress is when we return to places we frequent only on occasion, like our vacation spot at the Jersey Shore that we've gone to for 11 summers now. Max and Sabrina have splashed around in the pools since they were tots. We've taken them to the same miniature golf place, the same rides, the same ice-cream store.

This weekend, I marveled as he roamed around the pool alone. He does this swim-walk thing and is able to go under water. Dave and I kept an eye on him, but we weren't in the water with him at all times. 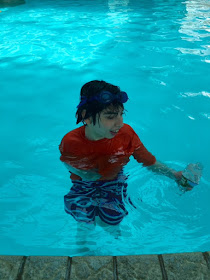 I smiled as he and Sabrina played together, and grinned when he dumped water on her head and she stood there and let him.

I groaned when he insisted on pushing the luggage cart around the cavernous garage—that I'd hoped he'd grow out of but, nope. Four years and going strong!

And how sweet it was. 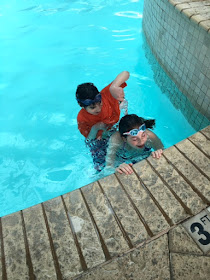