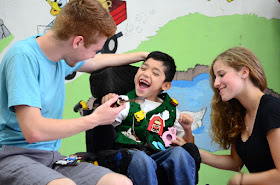 This guest by is by two recent high school graduates who created, as part of a school project, a rather amazing and very unique therapeutic toy for children with cerebral palsy—although it would work well for children with autism, Down syndrome or any who have fine-motor skill challenges.

Hi, all! We are Noah Saldaña and Devin Lewtan, recent graduates of Beaver Country Day School in Chestnut Hill, a town just outside of Boston. We would like to tell you about a product that we have been developing for the past year: a vest that specializes in helping children with cerebral palsy practice the fine-motor skills associated with getting dressed.

Our baby, named the Skills Vest, was first conceived in Winter 2014-15 at NuVu, an innovation school geared around multi-disciplinary, collaborative projects. Founded by graduates at MIT (utter geniuses), participating middle and high school students are taught the creative process through the production of prototypes. NuVu is structured in two-week studios led by full-time coaches (the previously mentioned geniuses) and guest experts.

The term that we spent at NuVu was “health” themed; everything within the realm of nutrition, medicine, disease and disorders was explored. Multiple studios addressed disabilities. These included Hacking Wheelchairs, in which students made devices for wheelchairs, and Trigeminal Neuralgia, in which students designed products for those suffering from a rare disease that affects facial nerves. We were assigned to work in Easing Cerebral Palsy: Clothes.

As friends of a fellow classmate at Beaver with cerebral palsy, we had prior experience with the disability. Devin has been coaching basketball to children with special needs for over six years, which sparked her interest in occupational therapy and early childhood development. Noah has heard numerous stories over the years from his sister who is studying physical therapy, which led to his fascination with the topic.

Regardless of our familiarity, it was obvious that we had a lot to learn. With fifteen other students, we brainstormed, researched and sketched possible project ideas. We learned that cerebral palsy is a congenital (present from birth) disorder of body movement, muscle control, muscle coordination, muscle tone, reflex, posture and balance. It also impacts fine motor skills, gross motor skills and oral motor functioning. We took this information into account when designing our vest.

Clothing that contains zippers and buttons is difficult to put on for some kids with cerebral palsy, as it requires fine motor skills. We wanted kids to have a fun way to practice getting dressed! We analyzed the skills needed to use zippers and buttons, and created games that allow kids to practice these skills. We brainstormed the different skills associated with buttons and zippers and came up with this diagram: 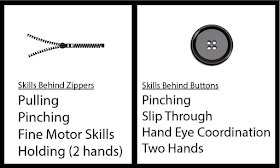 Our vest would not only allow kids to practice the basic motions behind zippers and buttons, but would also be fun and entertaining (and extremely fashionable)!

With the help of our awesome coach Rosa Weinberg, a full-time teacher at NuVu, and Javier Leal, an architect from Monterrey, Mexico and the founder of Mas Libertad Menos Barreras (a nonprofit that provides design services for low-income families with children with cerebral palsy in Mexico), we created our first prototype of the vest by the end of our first two-week studio.

We went for a pegboard-like design allows customization for and by the child wearing it. The toys on our vest are attached through our own original mechanism It is a four-part system using three pieces of wood and a 3D printed object. This mechanism allows for the toys to be rearranged.

We made the vest out of purple felt we found in the materials bin at NuVu Studio; the material could be easily laser cut and sowed. It was sized for kids ages 5 to 8. The toys on the vest were made of laser-cut wood and then painted. Each toy was designed with a different skill in mind, based off of pre-existing occupational therapy toys. Since the toys are attachable and detachable, they can be placed wherever is most convenient and beneficial for the child. Game levels can also be customized; if a child masters the beginner’s games, they can “move up” a level and attempt something more advanced.

Here’s an example of what a toy does: the slider (the green and yellow one furthest on the left of the vest below) is made to help practice the motion behind moving a zipper up and down. 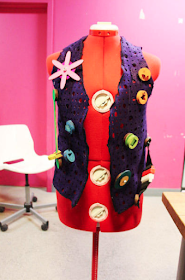 As you can see, the vest was quite hideous. Yes, it addressed the specific skills we focused on in our research, but let’s be honest...who would want to wear this? But this is what NuVu trained us for: NEVER BE BOGGED DOWN BY UGLY AND UNFASHIONABLE FIRST PROTOTYPES!

A few of the projects created in the first Cerebral Palsy Studio were selected by Javier  to be pushed forward in a second studio, including ours. We couldn’t be happier to be able to working on this project for another two weeks! Other projects chosen: The Fashionable Lift Vest (a fashionable alternative to lifting issues), Uplift (a mobility device that makes it easier for caretakers to maneuver, lift and rotate a child in tight spaces) and Arte Para Todos (a drawing and writing tool for kids with cerebral palsy). These sparked the idea of a field test in Monterrey, Mexico. They said the location was chosen because of Javier’s work there, but we still believe it was because of the fresh guacamole.

We worked for an additional two weeks at NuVu, modifying and improving the design of the vest. We made the toys more intuitive and shifted to a more visually appealing theme of farm animals. We even made the vest green and brown to represent grass and dirt. Our newer iteration was irresistibly cute (we might be biased…) and received flying marks from Javier and Rosa! We worked with local children in Boston with disabilities similar to cerebral palsy. It was an eyeopening experience. This was our first real field work and it gave us a great sense of what was working and what was lacking. It was a huge success and we returned to Nuvu Studios with our adrenaline pumping and our heads high. 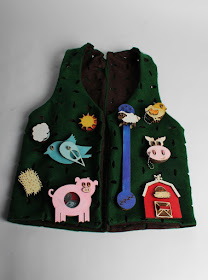 After this field test, we redesigned certain toys (such as the barn and the pig) and designated the more difficult toys as “advanced” toys to provide variety and challenge. This is where we left off before going to Monterrey, Mexico, a few months later: 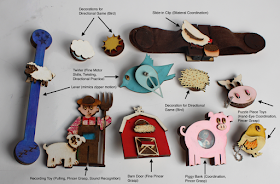 Last summer, we flew with Coach Rosa to Monterrey, Mexico with a group of students. There, we teamed up with industrial design students at Monterrey Institute of Technology (Instituto Tecnológico, for those who know their español), and continued to make new iterations of the vest. We worked for a week and then brought our vest to Nuevo Amanecer (translation: A new way to begin), a center for children with cerebral palsy. A young fellow named Abraham test it.

With little to no explanation, Abraham picked up the toys and went at it! He was giggling, laughing and most important, was intrigued by everything that he picked up. Everything was intuitive and entertaining. Instead of playing with the toys after we placed them on the vest, Abraham grabbed as many toys as he could get his little hands on. He shrieked and smiled as he played with the jumping sheep and piggy bank. 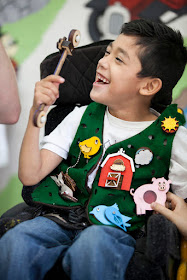 Abraham wasn’t the only one having a blast. It was amazing to see him play and understand our thought process, no explanation necessary. We could never have predicted such a positive and inspiring reaction. If we weren’t passionate about the vest before this point, you can be sure that we were in love with it after Abraham give us the two big thumbs up (in his own way).

In the final weeks of our high school careers, we came back together to take the vest where it is supposed to be: everywhere. We have been reaching out to local toy stores in the hopes of retail, occupational therapy centers and bloggers (like the very nice Ellen!) for valuable feedback. We have considered starting a Kickstarter for this project. We’re looking to get a patent and find a manufacturer—so if you have any interest in that or ideas, or just want to reach out to us, email us at saldanan@wustl.edu.

The Skills Vest has changed our lives in so many ways. We have learned an incredible amount about cerebral palsy, the innovative process and children in general. It’s helped us become great friends, and collaborate on something that can truly help people. Most importantly, we have learned that most key part of every kid's childhood is their happiness.

The Skills Vest means so much to us, and we hope that it will change the lives of others, too.
Ellen Seidman at 6:35 AM