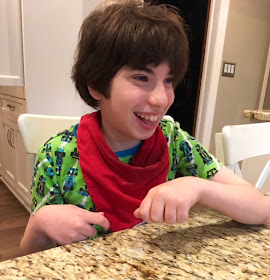 My mood last night was of the grouchy variety. Sabrina seemed to have maybe possibly sprained a leg muscle but she wasn't sure. The baby went to sleep at around six, then proceeded to wake up four times afterward. I had work to do. Our sprinkler had been randomly going off all day long and the gardener guy never showed up to look at it. Dave was away on business so I'd be doing the late-night feeding (Ben has a bottle around midnight) and early morning shift (he wakes up at 5:30 a.m.), and I was already exhausted. #poorme

Max, he of the sky-high Emotional Intelligence, watched me prepare his evening snack: mashed banana, with a dash of powdered meds.

"Who's there?" I asked, dutifully.

"Ice-cream fire truck!" he said, and cracked himself up.

I had to smile.

So then I tried that classic knock-knock joke on him. I'm pretty sure I have before, but I don't think he ever got it.

Max cackled. And then, he repeated it back to me.

Just lack that, the grumpiness evaporated.

So then I had to tell him those other two standards:

And this one, shared by a kid in my Girl Scout troop:

I was killing him. But what I loved most was that he repeated each joke back to me, as if he was testing it out to see if he could tell it.

He could. And his timing was perfect.

I promised him we'd put them on his iPad speech app so he could tell them at school.

There was one more I made up:

He found that one a lot funnier than I did.
Ellen Seidman at 6:40 AM