Max says it was the best bar mitzvah ever 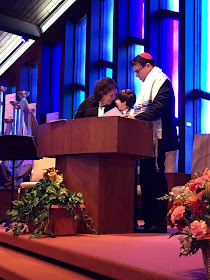 My greatest hope for Max's bar mitzvah, which took place yesterday afternoon: I wanted him to have both a fun and meaningful time.

I got my wish. Actually, I got more than my wish.

Max owned the ceremony. We put it together ourselves, creating our own tradition. He sang his songs and prayers beautifully, accompanied on guitar by a music teacher with whom he's been practicing for eight months. He was especially gleeful about belting out "Thank You, God"—sung to the tune of Fire Truck—because he'd made up the words. ("I love the mitzvah of helping people, I want to be a fireman when I grow up!") The refrain of "Uri, Uri" had special meaning to me: "'Cause you've got the music in your soul, this world needs to hear your song...."

When Max made his speech, first he used the speech app on his iPad to pronounce each sentence and then he articulated the words. He noted that he is good at being Jewish and doing good; that he'd done a fire safety presentation at school for his mitzvah project; and that everyone should join him in eating sushi afterward. You've gotta love a bar mitzvah speech that mentions sushi.

Max had a gigantic smile on his face the entire time, and giggled when people pumped their fists and said "Woot! Woot!"—he requested no clapping. He had everyone in the sanctuary laughing and crying; there is a reason we had 70 packets of tissues handy (thank you, Kleenex).

I only lost it a few times. Mostly, I was beaming, thrilled by his delivery and confidence. Boy, was he in control. Max told one of his cousins "Shhh!" when he heard her talking, and directed Sabrina where to stand when she came up to sing a song with him. At the end, he gave the rabbi a hug. After stopping by a pew to give his teacher one, too, he booked out of there for his party. (We had the ceremony videotaped, I will share it once I get video.)

At the cocktail hour, Max hung out with friends. He downed a piña colada from the kids' bar, then requested another. He wasn't embarrassed when I ate my body weight in pigs in blankets. He corrected anyone who called him Max—since of course, his actual name is Fireman Max.

He made an ecstatic entrance into the party room wearing his Fireman Max hat as Firework played. He danced it up. Max had asked to not be raised high on the chair during the hora, but when the predesignated Max Lifting Committee got him up there, he asked to go higher. Then he asked to do it again. Then he wanted Dave to go up on a chair. Then me. Sabrina went up, too. Baby Ben: no.

Max welcomed special guests to light candles on his cake. He and the kiddie crowd played games with the DJ. He watched, in awe, the photo/video montage I'd made of his life, and kept watching it again and again as it looped on the video screens. He ate a giant slice of birthday cake. He got pics taken in the photo booth. He danced some more, including our mom/son duet to "Just The Way You Are."

And when it was over, he requested another bar mitzvah. "This year!" he told me, hopefully.

I am too fried to say more, so for now, I'll just share the speech Dave and I made at the party. Max held the mic for us the entire time.

Ellen: My friend Wendy recently gave me a compliment; she said I always choose happiness and joy in life. Actually, that’s not completely true. Happiness was delivered to me and Dave, and his name is Max. From his first smile at two months old, Max has added cheer, exuberance and joy to our lives, and to basically everyone who comes into contact with him. To know him is to adore him.

Dave: Behind that smile is a whole lot of strength, determination and will. (Stubbornness, too, which explains why Max’s first word was “No!”) Max knows exactly what he wants, at all times. When we went on a joy trip last winter, Max chose the destination — Chicago. He watched videos on YouTube about Chicago and when we were there, it was him telling me how to get around.

Dave: We’re so glad you’re here to celebrate Max’s bar mitzvah. You’ve come from places near and far including Tennessee, Missouri, Texas, Georgia, Chicago, Los Angeles, Maryland, Massachusetts and that truly exotic locale, Brooklyn, New York. So many of you have played a role in Max’s life, whether directly with him or enabling me and Ellen to be the best parents possible to him.

Ellen: My father, Zaydie, is here with us in spirit, and likely wondering how good the food is—he loved a good meal. He was impressed by Max’s progress, and he would have been so proud of him today. At the beginning of Max’s life, we only hoped this day would come; eventually, we knew it. “I can see the brightness in his eyes,” a doctor once told us. I know that today, you've seen it too.

What I hope people saw at Max's bar mitzvah

13 years of one amazing boy: the video 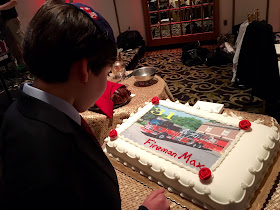