The supermarket standoff: On refusing to do stuff for your kids 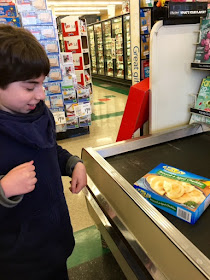 As independent as Max is getting lately, he's stubborn about using both hands at once. Since his right hand is weaker, it's easier for him to try to do things with the left one. Make that try to do everything with the left one. We tease him about how he forgets that he has two hands, but it's no joke watching him struggle to do stuff single-handedly. The refrain me and other parents of children with cerebral palsy regularly chant: "Two hands! Two hands!"

So then Max and I were grocery shopping last week, and at the checkout counter he was loading items onto the conveyor belt. For once, nobody was behind us so I let Max handle it alone. Only he
kept picking stuff up with one hand, dropping it, trying again and repeat repeat repeat.

"Two hands! Two hands!" I kept saying, to no avail.

"Firemen always have to use two hands when they work!" I noted. He ignored me.

Then Max attempted to pick up a carton of milk with just his left hand, a truly tricky proposition. His hand doesn't quite open up all the way and so he couldn't fully grasp the carton.

"No!" proclaimed Max, and proceeded to keep trying.

"Max!" I said, more wearily this time, "there is no way you can pick that up with one hand."

He knew I was right. And so, he abandoned the milk carton and turned his attention to a package of Mrs. T's Pierogies, one of his fave foods. He almost succeeded in lifting it with one hand but then.... 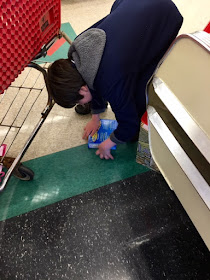 He looked at me, expectantly.

He gave a little foot stomp.

Meanwhile, the cashier was watching us and I'm sure wondering why the heck I was refusing to help him.

I stared him down.

Finally, he used two hands to pick up the package and place it on the conveyor belt.

Then he returned to using one hand for everything else.

This time, I didn't say a word as he struggled. At some point, Max will have to accept that even though his left hand doesn't operate quite as well as the right, it really can come in handy.

I eventually pitched in with the heavier stuff. When everything was all rung up, Max and I swiped the credit card hand over hand and I let him sign. He went with his initials, and the legibility was pretty impressive. You can guess what the "FM" stands for: Fireman Max, of course. 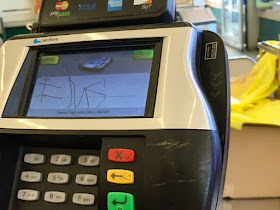