How far should you push your child with special needs? 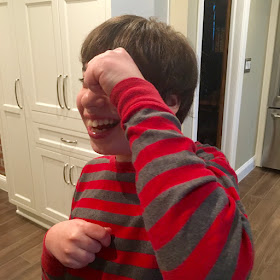 Sabrina and I went to Riverdance over the weekend. Dave and I saw it years ago, and loved it. The dancing was just as jaw-dropping, but I could have done without the song interludes which made my always-busy mind wander. As I sat there in the dark, I wondered whether we should be doing more to encourage Max to see shows.

I'd offered to bring him when I bought the tickets months ago, and he'd said no. I didn't push him, because it's been our experience that unless it is something he is already into—like the Disney Junior Live shows we've taken him to in recent years—there is a good chance he will bolt out of there. (I have yet to find a performance centered around fire trucks/firefighters.) But I felt guilty that he wasn't there with us.

When I was little, my parents often pushed me and my sister to see and do stuff that we wouldn't have necessarily wanted to—museum exhibits, dances at a Native American reservation, the works. True, Max has sensory issues that make him sensitive to loud noises. And he is a creature of habit who sometimes shuns stuff he is not familiar with. Still, it's parents' job to introduce their children to the wonders of this world. "Expose him to as many new experiences as possible," the pediatric neurologist told us when Max was a baby.

I haven't exactly been a cruise director for the kids these last few months since Ben and the bar mitzvah have been somewhat consuming, but as I sat there in Riverdance I vowed to find some cool show to take Max to—likely one of the autism-friendly performances at a local theater.

This week I got an email from the staffer at Max's school who coordinates participation in the local Special Olympics Track and Field event. Every year, I ask Max if he wants to go and every year, he says—and I quote—"NO!"

Last night, I asked him if he wanted to be in a race. Even if he turned me down, I was thinking of driving him over to check it out.

He put his hand up to his head and said, "Hmmmm....." He does that lately when he's pondering something, and it always makes me smile. "I'm thinking," he informed me. And then he said: "YES!"

"Are you sure?" I said, pressing my luck.

I wanted to make sure he was clear on what would be happening.

"Are you going to go fast or slow at the race?" I tested him.

"Are you worried you'll fall?" I asked.

He had a point. He's pretty steady on his feet, but he trips on occasion. I told him I'd buy some knee pads, and that way he could go fast if he wanted to.

Then I asked him to do a little practice run around the kitchen, just so he knew what he was in for, and he did, laughing.

Repeated encouragement can work. Forcing things: not so much. And so, next weekend I will be taking Max to participate in his very first Special Olympics event. Maybe he'll bow out at the last minute, but the first step is getting him to agree to go in the first place, and he has.

And he didn't even mention wearing his Fireman Max hat.
Ellen Seidman at 6:37 AM