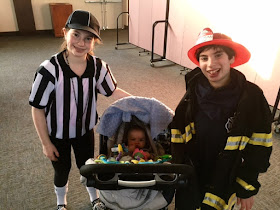 We were at our temple last night for Purim, a holiday that commemorates the defeat of a plot by Haman to massacre Jews in 4th Century BCE Persia. The story is recorded in the book of Esther and every time Haman's name is read, people stomp and rattle clappers and graggers (noisemakers) to block out his name. It's also traditional for people to send each other food gifts, and wear costumes.

Sabrina dressed up as a referee, Max was YOU KNOW, Ben had his peapod costume but I didn't get a chance to stuff him into it since he fell asleep, and I went as a tired mom. Sabrina did not appreciate my "costume."

Max had decided to walk down the long aisle in the sanctuary to the podium, where he stood and stared in fascination at the rabbi, who was dressed like Elvis . I was in awe of Max. The room was noisy, but he didn't care. There were a ton of people there, but he didn't care.

Some adults and kids were staring at him curiously, and I didn't care.

Used to be that in settings like this, where there were a lot of other kids around, I would mainly notice how Max stood out from the other kids. Especially during his early years, when he wasn't yet walking or talking and the other kids his age at the temple, park, party, mall or wherever. As the years went by, I stopped comparing him to other kids and appreciated Max for who he was: Max.

Last night, I watched Max in action. He wasn't into making a craft; instead, he wheeled Ben around and introduced him to people. When people said "Hi, Max!" he corrected them: "Fireman Max!" He downed pizza, with some help from me, and ice-cream cake. While Sabrina was off with her friends, Max, Ben and I took a tour of the preschool where Sabrina had gone. We met a couple with a baby and Max wanted to know when her birthday was, and also if she cried a lot like Ben does. In the sanctuary, Max giggled when people made noise as Haman's name was called, although he didn't want to rattle a gragger himself.

Max was charming. He was social. He was curious. He was all over the place, doing his own thing. A pack of boys his age ran by us as we walked around. I didn't get that old he's-not-one-of-them pang. All I saw was Max, having a great time.