Not in the development books: Child will learn to tease you 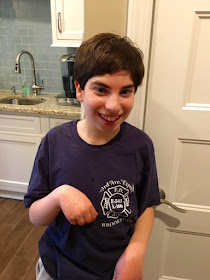 Last night, Twinkle, Twinkle Little Star was playing on one of our Pandora baby channels and Max said, "Bar mitzvah!"

I said, "Huh? You want that song at your bar mitzvah?" We've been making a list of music he'd like the DJ to play.

Max said, "YEAH!" Then he cracked up.

Max has learned how to tease me. It wasn't something I ever missed during his development, same way I have never once regretted that Max doesn't say "What-ever!" to me like SOME siblings I know. But now that he's teasing me, I am psyched. Because this is cognitive progress. Also, this is what teens do.

There's some gentle mocking happening, too. The other day, I pulled a box of crackers out of the snack drawer only I'd put them in upside down and a bunch spilled onto the floor. "Ha ha ha ha ha!" said Max, giving me his best you're-such-a-lovable-klutz grin.

Lately, he's also doing this funny thing that I am pretty sure he got from his teacher, Linda, who has a great sense of humor. I'll ask him a question—say, "Max, do you want to run to the supermarket with me?"—and he'll put one finger to his forehead, like he's thinking, then say, "Hmmmm...NO!"

I'm not just excited by all this, I'm delighted. As I've said before, I subscribe to the "What not to expect from your child with special needs" school of parenting. I have plenty of hopes for Max's development, but no expectations. Because he will do what is he capable of doing, on his own timeline.

And so: Yeah, teasing! I'm going to work on getting Max to say, "Kid-ding!" Not the least of which is, he needs to get better at articulating k's and d's.
Ellen Seidman at 6:37 AM