Do parents have the right to stunt the growth of children with severe disabilities? 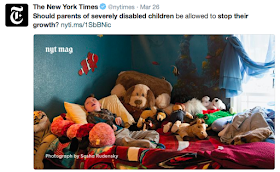 "I can't imagine the emotion, physical, and spiritual strength of the families [who] have to make these choices," read the comment. That was one reaction to the article in this week's New York Times Magazine about parents who chemically stunt the growth of children with severe disabilities. Selfish, abusive, barbaric, sickening: Those were other reactions, words that came from parents of children with disabilities. Meanwhile, adults with disability were outraged. "The humanity of disabled people is apparently secondary to the convenience of those around us," tweeted Lei Wiley-Mydske.

The article, Small Comfort, is by Genevieve Field, a colleague from my days as an editor at Glamour magazine. It's a complex topic, and I found her piece to be lucidly written, thought-provoking and disturbing. Adults in the disability community rightfully noted that people with disability should have been quoted; it seemed like the editors wished to focus more on families who supported the treatment than on philosophical discussions (per an author Q&A on Digg).

I'll attempt a summary: A small but growing number of parents of kids with severe disabilities are opting for growth-attenuation therapy. It consists of administering estrogen estradiol (done via injection, I believe), which speeds up the rate of skeletal maturation and drastically reduces a child's adult height. The younger a kid is when treatment starts—typically between ages 3 and 6—the shorter they'll end up. The children it is being done on are nonambulatory, with considerable intellectual disability.

Parents who have done the therapy said they didn't know how they would hold, lift, bathe and otherwise handle their children once they grew older. Additionally, they believed that keeping their children's height in check would allow them to continue to participate in family activities, outings and daily life as they get older.

The treatment first came to public attention in 2006, when JAMA Pediatrics published a case study  about a six-year-old girl who got GAD, along with a hysterectomy; her breast nodules were also removed. The parents of Ashley X, as she became known, started the website Pillow Angel to bring attention to the topic and offer parents a private forum for discussion. Now a teen, Ashley still has the cognition of an infant, her dad told The Guardian, along with the height and weight of a 9-year-old.

Adults with disability, advocates and others are horrified by the violation of the rights and freedom of persons with disability (PWD), and unnecessary bodily manipulation by a guardian. They note that laws were fought for, by families and the disability community alike, to stop the mistreatment and abuse of PWD. Alice Wong of the Disability Visibility Project tweeted, among other critiques, the need for more services and supports so parents wouldn't feel alone in raising a child with severe disability (although you can understand why the possibility of that down the road wouldn't matter much to a parent grappling with the decision now). The Director of Policy Rights at The Arc wrote, in response to the piece, "The decision making process, outlined in this piece, is based on the needs and desires of the caregivers, and completely removes the voice and rights of a child with disability." Also troubling: There is no research on long-term effects of the treatment, and whether a smaller person receives better care.

Some point out that while the thought of caring for an older child with disabilities may seem seem overwhelming, circumstances can change. Genevieve interviewed Eva Kittay, a professor of philosophy who has a fortysomething child with cognitive and physical disabilities. Kittay spoke of the balance they now have, with her daughter in a residential school during the weekdays and at home on weekends. "You cannot halt things, keep them children," Kittay said. "You have to think about your family changing. You will have other needs. They will have other needs."

As the parent of a child with spastic cerebral palsy, I do understand the anxiety about caregiving. Lifting Max into our minivan, dressing him and helping him up when he trips and falls is real physical work—and his CP is considered mild. I can only imagine the challenges faced by parents of children with more severe physical disabilities. I am also not one to cast judgment on other special needs families. We may have commonalities but, ultimately, none of us have walked in the others' shoes. The scathing comments left by some people were disturbing. Most of the families I know do their best to make decisions they feel are right for their families.

Still, I share some concerns touched on in the piece. As I read, I kept flashing back to Max's early years. At age three, he had started walking but had serious cognitive delays. We could not have known—nor could any expert have known—how that brain of his could and would flourish, scary MRI scans be damned. Raising Max has taught me to presume competence, a tenet that growth attenuation violates.

Who's to say that a child with low cognitive function—the kind who this treatment is recommended for—won't progress? Who's to say what thoughts, wishes and desires circulate in the mind of a child who can't yet communicate them, yet being the operative word? Who's to say whether such a child could end up feeling like a prisoner in a body forced on her, much as people with intellectual disability may have felt decades ago when they were institutionalized?

I considered how this treatment could affect the way others view a person with disability. As it is, people often talk down to people with disability; I regularly see this with Max. It frustrates me when others address him in a baby-ish tone. Worse is when they talk about him as if he isn't even there. A person with disability who is made to always resemble a child will likely always be treated like one, no matter how they mature inside.

I thought, too, about the possibilities that technology may bring in assisting with caregiving for a person with severe disability. I've been amazed at the augmentative communication options that have cropped up in recent years; coming up, an app that will translate impaired speech. True, it's one thing to create a speech app and another to create a robot who could assist with dressing, carrying and lifting a person, but I'll bet that will happen. I've read, for instance, about robots being tested to do tasks including shaving and folding the laundry for people with disabilities.

And then, I wondered and worried about the variety of parents considering the treatment. Over the years, I've encountered parents with a pretty old-school mindset about children with special needs. Why should a person who considers a child with disability to be someone who can't make contributions to the world, someone they consider a defective human being, be allowed to decide that child's fate? In who's best interest is this treatment, then?