5 things I learned about people with disability watching new movies 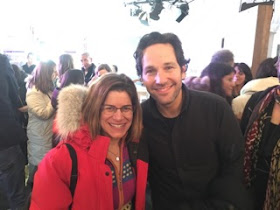 This guest post is from my friend Bari Nan Cohen. She's a mom of two, entertainment editor and writer, and one of the funniest, liveliest, most goodhearted women I've ever known.

I’m in a pretty great club called FOE—Friends of Ellen. We worked together at YM, where I was entertainment editor, helping our teenage-girl readers decode the mysteries of teenage life (i.e., boys). It’s only fitting that we had our first babies (boys, of course!) within six months of each other, albeit by then I was living 2500 miles away in Park City, Utah, and taking full advantage of the fact that Hollywood comes to my backyard for the Sundance Film Festival every year.

Despite the distance, and the differences in our respective families, we have learned from each other as parents. I like to think in our friendship that I give Ellen the “He’s still just a boy” reminders and she offers me the gift of Max—an amazing kid, with an awesome personality, incredible interests, a wickedly contagious laugh and specific needs that have shaped his parents’ world view. She's shown me that there’s no more staunch and determined advocate than a caregiver of a special needs child. (That's true of parents of typical children, but in parents of kids with special needs, it’s more like a superpower.)

What I have learned about special needs people from Ellen informs the way I do things. And, so, it informed the way I viewed three films I recently saw at Sundance 2016.

Life, Animated is a documentary based on the book by Ron Suskind, father of Owen, now 23. This coming-of-age story is framed around Owen’s affinity for Disney films. Over time, his family realized that they could leverage that love into improving his verbal communication and his understanding of the world around him. The film documents the year he graduates from a residential school and moves into an assisted living complex.

Eddie the Eagle, which opens Friday, Feb 26th, is a fictionalized biopic directed by the inimitable and hilarious Dexter Fletcher. It follows the improbable journey of Eddie “The Eagle” Edwards (Taron Egerton) from a child who spent a year in hospitals for a disability that isn’t named, wore a leg brace for a period of time and grows up feeling determined to be an Olympian, to an adult athlete who realizes his dream as Britain’s sole ski jumping athlete at the 1988 Olympic Winter Games under the guidance of a reluctant American ex-pro (Hugh Jackman).

The Fundamentals of Caring stars Paul Rudd (based on the novel The Revised Fundamentals of Caregiving by Jonathan Evison) as Ben, a father who has suffered a great loss. He takes on the caregiving of Trevor, a twentysomething with muscular dystrophy who uses a wheelchair and whose single mother has designed a routinized, nearly-housebound life for her son as an act of survival (spoiler alert: hers, not his). They wind up on a wacky road trip, with a runaway (Selena Gomez) and a pregnant military wife that forces everyone involved to push the limits of their expectations of themselves.

Some of my takeaways:

Hope is the secret sauce.
We build on hope in everyday circumstances, regardless of our situation. But in the special needs world, hope is like a sixth sense, the thing that makes figuring out life’s puzzles possible. In Eddie the Eagle, the child who seemed relegated to living on the sideline tells his mom he’s training for the Olympics, and in spite of his dad’s discouragement (based on worries the kid will get his hopes dashed), Mom provides a biscuit tin to 9-year-old Eddie—“to hold your medals," she tells him. And, so, empowered with hope, he tries his hand at dozens of sports.

Treat people with disability like...any other people.
Ellen has often written about how she wishes people would address Max directly in conversation  rather than behave like he’s not right there. So the moment at beginning of The Fundamentals of Caring when Ben talks about Trevor in the third person, as if he isn't in the room, I cringed. But as Trevor calls Ben out, revealing a biting wit and hilarious potty mouth, it's clear who's got the sharper mind of the two—and that while Trevor has special needs he doesn't always require special handling.

People with autism are just people with different challenges.
That's a line Owen delivers at a conference on autism where he is the only person with autism to present. It seems true of people with various disabilities. I’ve never met a human—special needs or otherwise—who isn’t capable of rising to meet a challenge. As Paul Rudd said after the premiere of Fundamentals, "We are more than our apparent limitations."

Success isn’t one big thing, it’s lots of little moments.
For Trevor, independence is earned, mile by mile, on a trip to visit the roadside attractions that he’d seen on TV. Owen’s successes range from knowing to ask for help when he can’t figure out how to open a mailbox to landing a job at a movie theater—the “inchstones” Ellen often writes about. Disney movies help Owen navigate almost every life circumstance. And I do mean almost. One of the film's funniest scenes is when Owen’s brother Ethan tries to have a frank chat with him about sex—only to find that without a Disney context, he has little basis for a meaningful conversation. “I mean, could we find some Disney porn?” Ethan asked rhetorically during an interview, with amused exasperation.

Inclusion isn't as effortless as it should be.
When caregiver Ben bumps up against a lack of ADA accommodations for Trevor at one of the attractions, it seems like a cheap laugh when they make the out-of-shape proprietors of a giant bovine exhibit haul Trevor, in his wheelchair, up the rickety barn-loft stairs. Except that it’s making a real point: Inclusion doesn’t come naturally to everyone and every situation, but the more we demand it, the less effort it will take in the long run. It reminded me of the point that my husband’s cousin and his wife, who are hearing-impaired, have made to friends and family: “If we ask you to repeat a missed lip-reading cue, don’t say, ‘It’s not important.’ It is. We want to be part of the conversation.”