Sometimes, you have to let go 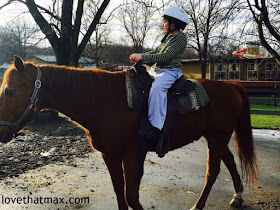 Max wailed—he didn't want to get on the horse. We were at Rocking Horse Ranch in Highland, New York for a few days last week, and he had told us he was psyched to go for a horseback ride. Now he was having second thoughts, but I wasn't letting him back down.

Max used to do hippotherapy when he was little, horseback riding used for physical, occupational and speech therapy. It helped encourage him to grasp (since he needed to hold onto a bar for stability), it got him to better balance his torso, it built up core strength, and it gave him good sensory input. So he wasn't exactly a stranger to horses, although it had been a while since he was on one. He gets like that at times—he says he wants to try something but when push comes to shove, he wants out.

I'd spoken with TJ and Scott, the stable managers, and they had been completely receptive to accommodating Max—they said they were used to working with kids with disabilities. Two wranglers stood by to help Max get onto the horse. I helped them get one leg in a stirrup and then up and over he went, sniffling sadly. They lead Max off for a walk around the corral; when he came around toward me he had a big smile on his face, helmet slightly askew but looking good. Nobody was holding his arm, which I thought was strange—he needed support. Or at least I thought he did. 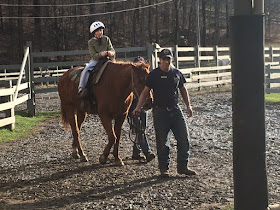 "More!" he said. Only one of the staffers was walking away.

"No, he's good," said the wrangler leading the horse.

"Er, OK," I said, dubiously. My heart beat faster as Max moseyed away.

"Please make sure he stays balanced!" I shouted and the guy nodded. I felt a strong urge to yell "STOP!" because I was so scared Max would fall off the horse without hands to hold him up. 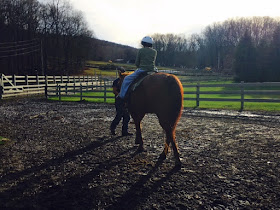 I did not tear my eyes away from them the entire time they were on the walk, this time a longer one down a path. Max has pretty good balance but all the way up there? As the horse, gentle as it was, swayed him? 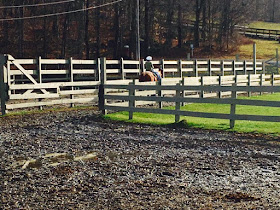 When they returned, Max had an even bigger grin on his face. Relief flooded through me. His body was a wee bit off balance but he looked comfortable up there, secure and proud of himself. 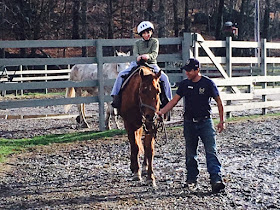 Over the next few days, Max took several more rides and he held the reins; a staffer held onto the horse but Max steered. The highlight of our stay was when Max and Dave went out for a ride, because there's nothing more Max loves than an adventure with Daddy.

Like two cowboys on the range, they ambled off and I watched, happily. 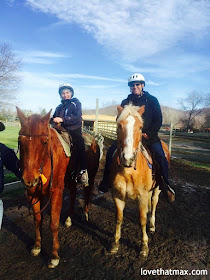