Not sure what to say to kids with disabilities? Here you go 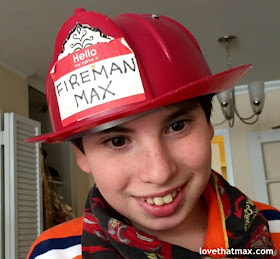 If you have a kid with special needs, you likely know the scenario: You see someone, adult or child, at the park, playground, birthday party or elsewhere looking at your  kid in a curious way. You can tell they would like to say something, but they're just not sure what. So maybe they just say "Hi" to you, and hope that you'll lead the way. Or maybe they never approach you at all.

I have been that mom more times than I can count, and Max has been that kid. And it's both frustrating and sad. I have learned to be the one to reach out first. As Max has gotten older, at times he also says "Hi!" for himself. But still: I ache for people to see past the disability and treat Max like any other kid.

The key word: "Hi." That's all it may take to bridge an awkward gap, as I've said in "What I'd like you to say to my child with special needs." You know, just like a parent or child would greet a kid without disabilities at the park, playground, birthday party or elsewhere. Now, a new campaign from the Cerebral Palsy Foundation (CPF) called "Just Say Hi" aims to diffuse the discomfort people sometimes have about conversing with people with disabilities; it features videos recorded by celebs and personalities.

Here's one from Jim True-Frost (of "The Wire" fame) and his son, Leo, who has cerebral palsy:

And here's one of my favorite actors, William H. Macy, on the topic:

The CEO of the CPF is the dynamic Richard Ellenson; he's dad to Thomas, 17, who has CP. The non-profit's mission is to transform the lives of people with cerebral palsy, social challenges included. As Ellenson says, "While 'just saying hi' only scratches the surface of all we can do, it's a simple and impactful first step."

I can't speak for adults with disabilities, but as the mom of a boy with CP who's very outgoing and social, I know he'd love to connect with other kids. I suppose "Wassup!" or "Sup!" or "Yo!" would also work. The point is, reach out. Don't be afraid. It doesn't have to be awkward.

If your child doesn't have special needs, think of how he or she would feel if people were reluctant to be friendly. Encourage your kid to say hello and chat, and please, do the same. Both of you have nothing to lose, and a whole lot to gain.
Ellen Seidman at 6:40 AM