Another theme park makes it harder for kids with disabilities 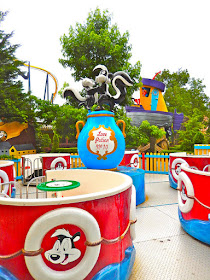 Yesterday my friend Peggy, mom to a boy with Down syndrome and autism, shared a flyer another mom had posted in an autism group she's part of. It's from Six Flags Great Adventure in New Jersey, whose disability policy will be changing as of November 7, 2015. (There's no mention of this so far on the national Six Flags Safety and Accessibility Guide). 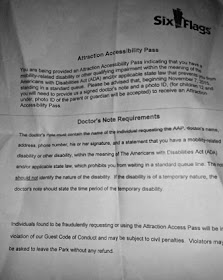 Like many kids, Peggy's son loves going to theme parks. But in order to make the trip do-able for a kid with disabilities, special access to attractions is necessary. This is not about beating the system, as some people say—it's about equalizing the system. Many children with disabilities can't handle crowds, due to sensory issues, or long waits, due to fatigue issues. Some have issues with internal temperature control, which makes waiting on lines on a hot day a medical concern.

Great Adventure's system for people with disabilities, which started in 2007, is similar to the way Disney has operated. The park requires guests who have an Attraction Access Pass to get a reservation time at the attraction and then return. When we were at Disneyland in January 2014, you could get reservations at kiosks around the park—although when that didn't work out so well for Max, we were able to snag other quick-entry passes although I am not sure whether they are still being handed out.

Peggy was pretty disheartened. "As if parents of kids with disabilities don't have enough to prepare for when planning a park trip," she says of the new policy about a doctor's letter and ID. She also noted that parents might not know they need a photo ID or a letter when they get in their car to head to the amusement park, and that very few kids over 12 would even have a photo ID. She pointed out that a doctor may not be able to provide said letter as quickly as a parent needs it.

"Every park in their country has their own set of ever-evolving rules, and it's becoming a lot to remember," she says. (Her family frequently visits Disney World.)

Theme park crackdowns started in late 2013, after social researcher Wednesday Martin—while putting together her book Primates of Park Avenue—discovered that some wealthy families were hiring disabled individuals to gain special access to attractions. This put parks in a tight spot; they had to do something to contain individuals trying to milk the system. As Peggy says, "The positive side of the new Great Adventure policy, of course, is that it will help stop the people who are lying...."

Peggy continues, "I will get this taken care of." It's what we parents of kids with special needs do. But we sure wish it didn't have to be so hard, and getting harder.

On 10/5, I received the following email from a Public Relations Supervisor at Six Flags Great Adventure & Safari:

We read the blog you posted yesterday regarding the changes Six Flags is implementing to its ADA access pass.

The only significant modification we have made is to require a doctor's note indicating that the guest has a disability that prevents him/her from waiting in a normal queue line. We are giving everyone advance notice of this policy change in order to minimize any inconvenience. In the situation where a young child has no photo ID, we will accept the parent’s or guardian’s ID.

The revisions to our policy are intended to benefit those that need special accommodations by eliminating the increasing number of guests who abuse our current system. Our main goal is for all of our guests to have a fun experience at our parks. You should also know that prior to the change, we consulted with various advocates for the disabled who were supportive of our revised policy and did not believe the "doctors note" aspect would raise any serious impediment for the truly disabled.