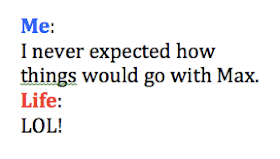 So, off we went to the temple yesterday morning to celebrate the first day of the Jewish New Year, with high hopes for the inaugural special needs service. It didn't turn out as I expected, and neither did what followed.

There were four families there. The rabbi leading the service, the Director of Education and Youth Programming, started off by reading a book about the New Year. She asked a few questions as she read, but Max tuned out. He was truly engaged by the next activity, though: We stood up and threw our "sins" and mistakes, using fake paper bread, into a fake paper river (the custom is you toss bread into a real river or other body of water). Max didn't have any mistakes to proclaim but Sabrina's made me do an invisible fist pump; she apologized for the times when she doesn't listen to me. Huzzah!

Then the rabbi read another book, at which point Max wanted out of there. He generally needs to be truly engaged in an activity for it to have meaning for him. Picking up basic ideas about religion from a book being read out loud in a roomful of people isn't going to happen.

I thanked the rabbi afterward for running the service. When I noted that Max had lost focus, she said, "That's OK!" Actually, though, I wasn't apologizing. I said I'd love to email her some thoughts, and I will. It seems like the kids would benefit from a more active and engaging session. I do not want to seem at all ungrateful because I feel just the opposite, but if the congregation is going to do this sort of program, it should speak to the audience.

And then, a surprise: Max headed into another activity. It was for second and third graders, but he didn't care. They were doing skits about when it's OK to laugh and when it isn't. In the first skit, a teacher asked a girl what she did during the summer and when she struggled to answer, another kid laughed. A discussion followed about why it was mean of the student to laugh. In the next skit, a fortuneteller predicted that a chicken would poop on a girl. The girl visited a farm and, sure enough, a chicken pooped on her. Everyone cracked up, including Max. The incident, the kids agreed, was embarrassing but as long as the girl who'd been pooped on was laughing at herself, it was OK to join in.

Max could not have been more engaged or entertained. So there you go: A non special-needs activity roped him in. This wasn't something that would have happened last year. Max's comprehension and willingness to try new experiences has really expanded.

Afterward, he wandered around the temple. We said hello to some people. He ate some challah. The rabbi gave him a big "Hello!" He generally seemed content. Sabrina, meanwhile, got to attend another kid service with friends and really enjoyed it.

Today, we return for the second day of the holiday. The next special needs service happens next week. I'm feeling this is a great—and heartening—start to the New Year.