Who is this kid? 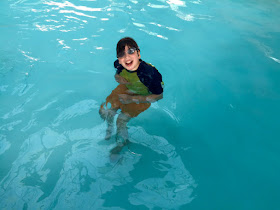 Dave took the kids swimming this weekend while we were on a getaway. I walked into the pool area to find Max repeatedly dunking himself underwater and jumping up again.

"Who is this boy?!" I laughingly asked Dave, a running joke between us. I was in awe.

Max used to be the kid who was afraid of water, let alone going under it, let alone trying to swim. He can do a pretty decent dead man's float now, and he's trying his best to paddle and kick. In the ocean, he boldly walks right into the crashing waves.

It's not that I doubted Max could get used to the water. It's not that I've ever been skeptical of his potential, because he is full of it. It's that once you've had a child who couldn't do something for a long time, and the ability is hard won, you never stop being appreciative or marveling. And it isn't just the biggies, like walking or talking or learning to read. It's the small stuff too.

Like when we were at a restaurant recently and Max was watching YouTube on Dave's iPhone and he asked if it was too loud. He's never cared before. "Who is this kid?" Dave said.

Like when Max, Sabrina and I were in the living room the other night. Max tends to conk out first; Sabrina is a night owl like me. Suddenly, we heard the toilet flushing upstairs and we all looked at each other and grinned. Max has gotten relatively independent with toileting, but getting out of bed and going by himself isn't usual.

Who is this kid? 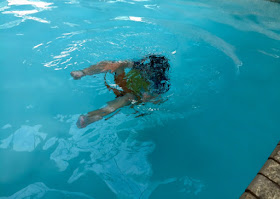