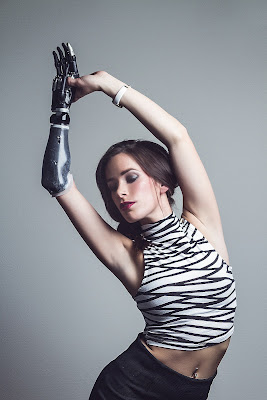 The FTL MODA show happening Sunday at New York Fashion Week is going to look different from others in a really beautiful way, and I'm not talking about the clothing. Self-described bionic model Rebekah Marine will be strutting her stuff along with Madeline Stuart, the teen model with Down syndrome. The Italian company, which has designed clothes for Lady Gaga and Beyoncé, paired with the Christopher & Dana Reeve Foundation and Global Disability Inclusion to feature models with disabilities. 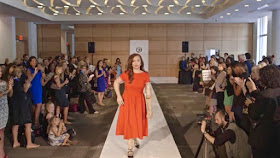 Along with eye-catching outfits, Rebekah, 28—born without a right forearm—will be wearing one of the most high-tech prosthetic hands available. She began modeling four years ago, and has been featured in Nordstrom's 2015 anniversary catalog, along with magazines and newspapers. The West Deptford, PA, resident is also an ambassador for the Lucky Fin Project, a non-profit that raises awareness for those with upper-limb differences.

Rebekah considers her bionic hand "a great conversation piece." As she told me, "People aren't so afraid to ask questions about my arm anymore. I remember being at a concert and the guitarist of one of the headline bands approached me and said that is the coolest prosthetic hand he'd ever seen in his life. I thought, 'Is this really happening?!'"

Attitudes and acceptance have come along since the days when she was a kid and wanted to be a model. When her mom took her agencies, she told People, "It didn't go very well, of course, when casting agents noted my disability. Hearing the words 'You'll never have a future in the business' really hit me hard." Getting her i-limb quantum, made by Touch Bionic, has inspired her to get out there and get gigs.

One day, she continues, "Hopefully I won't be considered a 'disabled' model, just a model. But I don't mind the tagline 'bionic model' so much. It's what makes me special, and I'm proud of it. For now, it works."

When I asked what advice she has for parents raising kids with disabilities, this is what she had to say: "Parents should always encourage their kids to reach for the stars, as clichéd as that sounds. I never thought in a million years I'd model for fashion giant Nordstrom or walk the runway for the biggest fashion show in the world. My parents always told me I can pursue anything I wanted and become successful at it if I tried hard enough. I thank both my mom and dad for always believing in me." 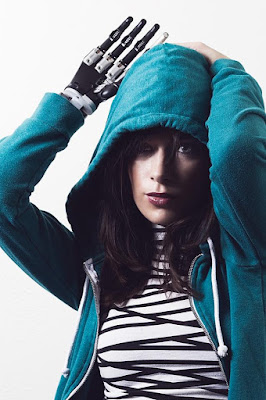 Images of Marine: SleeperAwake; image of Crespo: screen grab/Vimeo
Ellen Seidman at 6:38 AM