He's having a good hair year 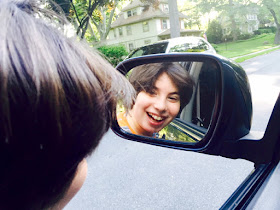 "Max! You look so handsome!" I squealed as I pulled up to the house in the car and saw Max and Dave walking down the front path. Dave had done Max's hair and it was parted in the middle instead of to the side. Also, Max is in dire need of a haircut and I always think he looks the cutest when his hair is at its floppiest.

Max trotted over to the car. I thought he was going to give me a kiss, but he leaned over, peered at himself in the rearview mirror and grinned at his reflection. I sort of thought he was looking like Keith from the Partridge Family, aka my former crush. When Max wakes up in the morning, he's more Paul McCartney 1964. With his hair completely swept to one side, early Justin Bieber. Which is all to say, Max has celeb hair.

It's totally typical tween behavior to care about your appearance. But what's also cool is the self awareness; Max hasn't paid much attention to his looks over the years. Dave and I have often wished that he cared more about the fact that he occasionally drools. That still doesn't bother him. But for sure: The hair must be in place.

Dave's had an influence. Max would watch him slicking gel through his hair in the morning, and started asking Dave to do that for him. There was also a practical concern: Max thought his ever-present Fire Chief hat looked better with his bangs out of the way. 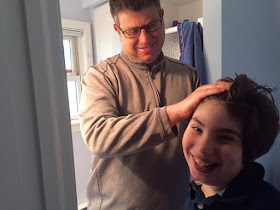 I'm looking forward to the the physical (and emotional and cognitive) self-awareness coming along. Dave and I joke that we wish Max were more aware that he possesses a right hand, the weaker one—therapists tends to call his "helper hand." He typically tries to do most things solely using his left hand and we're always chanting "Two hands, Max!" Another mom I know whose kid with cerebral palsy has the same issue teases him that his hand will fall off if he doesn't use it more often.

Meanwhile, at least the hair is motivating him.