If you're happy and you know it 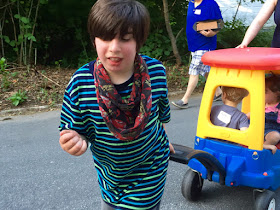 This weekend was our neighborhood block party, an annual event in which neighbors and their kids flock to our block to mingle, BBQ, picnic, jump around in a bouncy house, feast on contributions to a baking contest and participate in the world-famous famous egg toss. 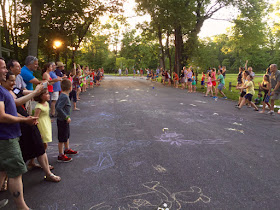 As usual, I marveled at how far Max has come. He used to be afraid to even come out of the house for the block party. But on Saturday, he wandered around like a boss. Actually, mostly he pushed a ride-on car another family owned, because pushing stuff around is still one of his favorite activities in life.

This year was different in that Max decided to give a little kid a ride, which was awesome. And then another little kid jumped in and there was Max showing two tots a good time. Progress! 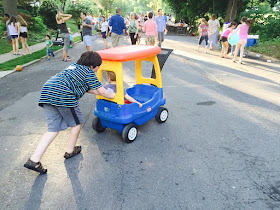 This year was not different in that, as I sat at a fold-out table, I watched a group of boys around Max's age playing a game whose basic purpose was to clobber each other with a big rubber ball. They were laughing uproariously.

I watched Max roll his car past them, and I felt a little lonely for him.

But Max, he was perfectly pleased to do his own thing. He chatted with some adults and informed them I was having a baby. He downed mac 'n cheese and a whole lot of lemonade. He laughed at the egg toss. He got hot and sat quietly in a folding chair on our walkway, waiting for the fire truck to show up for a visit.

I sat next to Max, held his hand and thought about how I sometimes project my ideas of happiness on him. I used to do the same with my parents, who separated when I was 12. Each ended up living alone, and I'd occasionally feel pangs of sadness for what they were missing. Over the years, though, I came to terms with the fact that it was the way they wanted to live, and just because I wished for them to find new partners that wasn't their idea of contentment.

I am still gaining that kind of acceptance for Max. I know that he is happy in his own way, same as anyone. So what if he wasn't rough-housing with the boys that afternoon—he had fun.

And then, joy of joys, the fire truck appeared. Max greeted Firefighter Sal and Firefighter Allen. He sat in his favorite seat as parents lifted their kids in and out. He helped close up the doors when it was time for the truck to leave, and then he cheerfully waved goodbye.

"Yes," I promised, and he went to sleep with a big smile on his face. 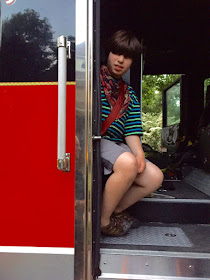