The unexpected foods you crave during pregnancy 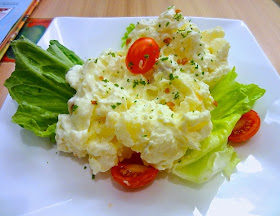 Turns out that potato salad was the source of the deadly botulism outbreak at that Ohio church potluck dinner (it was made with canned potatoes). I read that in the news the other day, and I felt badly for the victims. I also thought, Hmmm, I could go for some potato salad. This is because it has become my new essential food group; I pretty much want it all the time. I would it eat for breakfast. Actually, I have.

It's not just that I crave potato salad; it is the one food that quells the queasiness that occasionally strikes. When the guy behind the deli counter at the grocery near my office sees me approaching, he automatically pulls out a little container of the stuff and hands it to me. It's weird; potato salad is usually something I eat at barbecues, and certainly not in the vast quantities I've been consuming. I've never before craved potato salad during either of my other pregnancies.

Thankfully, it's not the only food I'm craving. My body is also begging for cottage cheese, sugar snap peas, orange juice, milk and half-sour pickles (which I always crave—pickles are one of my favorite foods). I don't want sweets, other than the occasional piece of chocolate; they just don't taste so good right now. When I tried to down a Samoa the other day, usually my favorite Girl Scout cookie, it wasn't as yummy as it usually is. Maybe the lack of sweet tooth is balancing out the potato salad carb overload. I hope.

So, yes, I'll have potato salad with that. And if any of you have a great recipe to share, please do! What foods did you crave during pregnancy?

Image: Flickr/Andrew.T@NN
Ellen Seidman at 6:37 AM