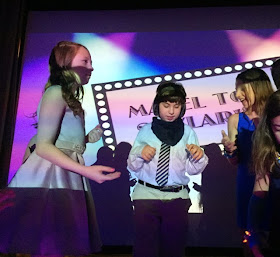 In the last couple of weeks, I haven't stopped thinking about this one thing a friend's kid did for Max. Maybe it won't seem like a big deal to some. But if you have a kid with special needs, you'll know how major it is.

Our family was at the bat mitzvah party of the daughter of one of my best friends. She has three girls, all of them awesome. There was a whole lot of dancing going on as a DJ spun tunes. Max wore his headphones (loud sounds unnerve him), and for a while he wandered around the dance floor, taking everything in and charming the photographer. A couple of times, Sadie—the middle child—came over and started dancing with Max, waving her arms and grinning. He just stood there, amused (I think he could really get used to having girls dance around him).

Other kids treated Max with the usual mix of reactions. A couple of boys his age standing nearby stared at him until I said, "Hello, this is Max," upon which they waved then walked away. Some girls his age smiled at him. Little kids gave him curious looks.

And then, a bunch of kids jumped onstage, mostly girls. Max asked me to help him up there. He stood smack in the middle of the stage, looking around. He wasn't really dancing, though I knew he was grooving in his heart.

Happily, I watched him enjoy himself. And then, this: As Sadie danced she leaned over, picked up Max's bib and dabbed at his mouth like it was the most natural thing in the world. It happened in three seconds, Max didn't even notice and they all kept doing their thing. I felt even happier.

Max drools because of the cerebral palsy, which causes oral-motor control issues. He isn't aware of the sensation, so he often neglects to dab himself with one of the cotton bandanas he wears unless one of us reminds him, "Max, wipe your mouth!" I haven't yet regularly used the Rx skin patch, scopolamine, that could help because Max doesn't care about the drool and I don't want to put him on more meds. But he's getting older and it's getting to a point where it's setting him apart from his peers and so soon I may go for it, with his permission.

Kids tend to gape at the drool. Some seem grossed out by it. But Sadie, she just matter-of-factly leaned over and dabbed. The sort of thing you'd do for a younger child who had something on his face, only she didn't hesitate to do it for an older kid.

"Girl dabs boy's drool" isn't one of those occurrences that would make Internet headlines, unlike the stories of, say, teams letting kids with disabilities make touchdowns at football games. Grand gestures are rare, though, and just that: gestures. Small, everyday, no-biggie acts of consideration are exactly what kids with disabilities need, coming from peers who don't think twice about it.

As social and personable as Max is, he doesn't easily fit in with other kids. I always hope that there will be at least one child who makes an effort to talk with him, to draw him in, to include him. I certainly don't expect personal care, exactly why I was so pleasantly surprised to see Sadie lending Max a helping hand.

It was a small act of kindness. But it felt gigantic, to me.
Ellen Seidman at 6:38 AM