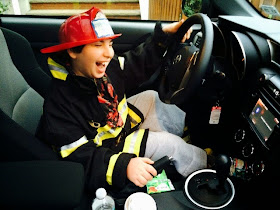 The question popped into my head and I blurted it out:

"Max, do you want to drive a car when you grow up?"

"No!" he said, emphatically.

He's previously informed that when he is a firefighter he plans to sit in the back of the truck and not be the driver, but this was the first I'd heard about him not wanting to drive a car. In fact, one of his favorite activities is sitting in our driveway in the driver's seat of our minivan and pretending to drive.

"Ash!" he said, and made a motion with his hands of a crash.

Oh, my heart. He was afraid he'd cause an accident. I knew what he was thinking.

"You don't want to drive because you have cerebral palsy?" I asked.

"Max, people with cerebral palsy can drive!" I said. I showed him some videos on YouTube. He was particularly fascinated by a guy with cerebral palsy driving a pick-up truck and a woman with CP who gave a detailed description of her car adaptations.

Then we checked out self-driving cars. Max watched the Google version navigate itself around with awe. Audi just came out with one and we watched that video, too.

In the end, he said he still wasn't interested in driving and I let it go. Hey, it's not like he's going to be applying for his license tomorrow. He has plenty of time to decide. Who knows, by the time he's old enough to hit the road everyone could be using self-flying cars.

I certainly don't want to give Max false hopes about driving; I just want him to know that possibilities exist. The cerebral palsy may give him considerable challenges with fine-motor skills and coordination, but in his mind, I want him to view life as one big, open road, awaiting him.
Ellen Seidman at 6:38 AM