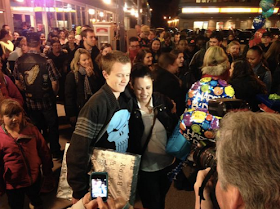 Yesterday, I read yet another story about social media coming to the aid of a kid with special needs who needed birthday love.

Odin Camus, 13, of Ontario, Canada, has Asperger's. He sent out about 15 invites for his birthday party on Friday, but none of the kids responded, per his mother, Melissa. So she went online to a local community group and wrote, reports CTV News, "I want his thirteenth birthday to feel special and like people care about him. I'm really struggling with finding a way to make today awesome for him, when it will just be us celebrating." She asked people to text his cell phone and wish him a Happy Birthday, and said she'd be open to other suggestions. People suggested she host a public event and invite people. So she planned a bowling night and opened the event to anyone who wished to attend.

Hundreds of people showed up, many of them strangers, bearing cards, balloons and gifts for Odin. The seventh grader got some 4000 text messages, along with many Happy Birthday messages on Facebook. The tag #odinbirthday was the top Twitter trend in Canada Friday night, and a whole lot of tweets poured in including ones from Canadian Liberal Party leader Justin Trudeau and Carrie Underwood. 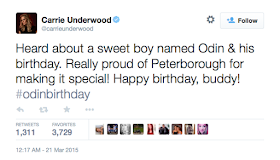 Odin was gleeful. So was his mom. "Honestly, Odin and I have been pretty much crying all day," she told The Peterborough Examiner. "People are here because everyone knows a kid who struggles to fit in." She hoped what happened told the world, "You don't have to be bummed out—no matter how down you feel, there's always someone there. Always."

These days, a growing number of parents are putting up requests on Facebook for people to extend birthday wishes to their kids with special needs. Chad, a 9-year-old with autism in Frisco, Texas, ended up getting cards and packages from around the world after his Dad asked Facebook friends to make his son's birthday memorable. Last year, the Facebook page a Michigan mom created in honor of her son Colin's 11th birthday—a boy who, she noted, eats lunch alone at school daily and has a disorder similar to Asperger's—racked up millions of followers and good wishes.

These stories warm the hearts of many, to be sure. I'd like to say these stories warm my heart, too, except there's one thing nagging at me: What about the rest of the year? What changes for these children when the crowds go away? What difference does this make for them in their usual life, in which isolation is the norm?

Over on Colin's Friends page, he and his mom now do videos answering questions from people and raise awareness about autism and differences, a Good Thing. He's participated in an anti-bullying campaign and gotten to hang with cool people, including the Harlem Globetrotters. I can only imagine how exciting this has been for him. But when I scanned posts and photos from the past year on the Facebook page, I didn't see any that indicated much has changed for him socially off-screen. And that bummed me out.

I am not saying these children don't deserve the outpouring of support and good wishes—of course they do. But it's Facebook and Twitter, not the real world. What I'm saying is, these kids deserve so much more.

As happymaking as it may for a child to see all the "likes" and to have a blowout birthday party with hordes of people, what would make the most difference for kids like Odin, Colin and Chad are for other kids to get to know them offline. For other parents to reach out to the parents of kids with special needs and make playdates and hangouts. For other parents to make sure these kids are invited to their children's birthday parties. And, of course, for parents to make sure their children RSVP to the birthday party of a kid with autism or other special needs.

Stories like these give a false impression of a happy ending to the masses. Birthdays happen one day annually; life is meant to be lived 365 days a year. The greatest gift people can give to a kid or teen with special needs isn't birthday cards, birthday presents or social media birthday wishes. It's true inclusion.