The boy who really, really wanted to talk 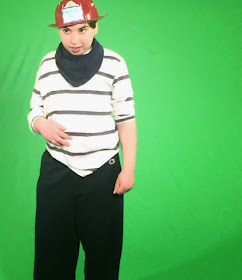 Max is a master of his speech app—he quickly zooms around on it, tapping symbols that speak words for him or typing out words and sentences himself. At school, his iPad is his main form of communication, although he also tries to express himself verbally. At home, he tries even harder to speak up. I think he expects Dave and me to understand him, even though sometimes we don't—but mostly, I think, this boy really, really wants to talk.

Here's a recent video with him discussing his favorite topic.  First he tells me he's going to Chicago on March 27, 2015. Then I misunderstand when he says "fire chief truck" (we found a retired fire chief who does organized tours). The rest is self-explanatory.


When iPads and speech apps first came out, I remember that—like many parents—I wondered if Max would get so fond of the speech app, he wouldn't want to keep trying to talk. Well, that sure hasn't happened. If anything, he seems more determined than ever to speak. In fact, the only time I ever see this kid get frustrated is when I don't understand him. All this is why I was blindsided by what the speech therapist told me at his recent IEP.

Overall, the education and therapy news was good. Max's reading is improving. Math continues to be a challenge, but he's working hard, same with social studies and science; the teacher is doing her best to bring the concepts down to reality level using hands-on activities, and involving as much repetition as possible (which is how Max learns best). He's been spoon-feeding himself well, learning to manipulate his pants during toileting, going up and down stairs like a pro and playing sports enthusiastically.

The speech therapist—a lovely, experienced woman who truly cares about Max—talked a lot about Max's growing ability to generate longer sentences and express ideas using a variety of nouns, verbs and descriptive words. When she'd had her say, I asked what I thought was a key question: What was she doing to work on articulation?

What she basically said was: Max's primary means of communication is going to be his iPad, so she believed it makes the most sense to focus on that, along with expanding his command of language and his perception of how conversation works.

"But he really wants to articulate words," I said.

She noted that she wasn't, of course, giving up. But she also made a point of saying that the school has provided years of speech therapy to him and she didn't see much improvement.

A mix of anger, frustration, sadness and pure dejection washed over me, and it took a lot of effort to keep it together for the rest of the IEP.

I do not have blinders on. Hardly. Max likes to talk about a lot of the same stuff (Chicago, fire trucks, his firefighter friend Angelo, mac 'n cheese), which is the main way it's easy for me to discern what he's saying. His speech isn't clear; as the IEP correctly noted, "Overall intelligibility is significantly reduced to the unfamiliar listener." I also agree that a speech app (or whatever new technological marvel comes along in upcoming years) will be his main form of communication throughout life.

But Max is only 12 years old and I know—if I know anything—that his potential for speech is hardly tapped out. The speech therapist who sees him on weekends is able to coax out consonants (his biggest challenge), including g's and otherwise elusive "k's" and "d's" plus final "m" sounds like "Mom." I called her later, distraught. "I feel like he has a lot of room for improvement," she said. "Don't lose hope. He has many years ahead of him to grow."

She noted that now that iPads and apps were so prevalent, there were therapists who were choosing to quit focusing on speech. I'm not sure how generally true that is, but it certainly seemed to be happening with the therapist at school.

Like many families of kids with special needs, we have relied on therapists over the years for coaxing the best out of Max and helping us best help him. For the first time in his life, a therapist was saying no can do.

Max gets speech therapy three times a week at school and just once a week at home, so school is his main source of speech guidance. I'm either going to have to supplement more at home, or figure out a way to get the speech therapist to agree to focus perhaps on just one speech goal—say, more d's—or, likely, both.

My first plan of action is to get an independent assessment from an experienced speech therapist who hasn't yet before worked with him; that objectivity seems key. And then, I'll take it from there.

I'm usually pretty indefatigable about getting Max what he needs. Bu this one's bringing me down. It's not just that I'd like Max to be able to speak more clearly—it's that Max does.