Lesson from Max: Throw your hands in the air and wave 'em like you just don't care 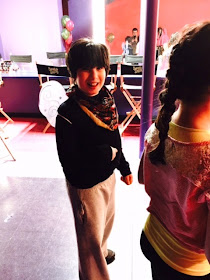 I stayed home, sick, and Dave sent me the video. It's funny to see the contrast between the kids. There's Sabrina, being the blasé 10-year-old. And there's Max getting into it.

I consider Max's lack of self consciousness a great thing. He doesn't care that he's doing an activity for younger kids or that he's a lot older than the girls all around him. Same goes for when he hits rides for young children at amusement parks, or when we've done character meet-and-greets at Disney.

In general, Max doesn't think of himself as different from other kids, or consider it an issue. In fact, the other day when we were talking about his cerebral palsy (I showed him a video he's in), he wanted to know what Sabrina has. "An attitude," I offered.

Max also doesn't seem to care what people think of him; he is oblivious to the curious stares he gets from kids when he walks around in his bright red Fire Chief hat (which he miraculously left at home on the day of the party). He also doesn't notice the blatant gawking of rude adults.

Max just knows to be himself, to enjoy himself and to love life.

I think we could all learn from him.
Ellen Seidman at 6:38 AM