When not to help your kid with special needs 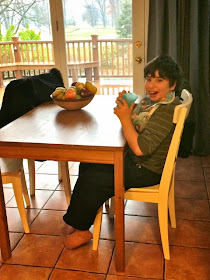 Max is a pretty determined kid. When he's psyched about something, whether it's a Chicago fire truck video or a big bowl of chocolate ice-cream, he'll keep at it, surfing YouTube and doing his best to grasp a spoon. But physical tasks can be a real challenge—and when you are used to Mom and Dad doing stuff for you, at times it can seem easier to expend your energy on persuading them to take over so you don't have to do it.

In other words, Max is fond of playing mind games when it comes to his independence.

This is very much the case with drinking from a cup. (We're still working on straw sipping although there's been progress, video coming soon!) Grasping a cup with two hands, raising it to his mouth, tilting it and swallowing without buckets of liquid streaming down takes a fair amount of fine-motor and oral-motor coordination. There are times during meals when Max points to the cup and gives me or Dave a look that says, "Come on, no big deal, you hold it for me."

Of course, he does not do this at school, where he traditionally does things independently even as he keeps expecting us to enable him at home. This happened with toilet training, and earlier on, with eating. I'll never forget how years ago, when we were constantly spoon-feeding Max, I stopped by his class one day and there he sat, happily shoveling food into his mouth. What?!

"How long has he been doing that?" I asked the teacher, who said it had been happening for as long as she could remember.

The other wily thing Max does is that when he is drinking by himself at home, he doesn't like me to see him doing it—cause then I will realize he actually is capable. I caught him in the act in the photo above, and he was peeved.

But I do not give in when he asks me to hold his cup, and we often fight little battles about it. (Marshmallow Daddy is known to give in, unless I am standing nearby to give him the evil eye.)

The cup Max uses is the Ergonomic Nosey Cup. "No!" he'll often say when I pull one out of the cupboard, because he knows that I'm making it easier for him and he won't have a strong case for getting me to help.

I'll pour the milk or juice, say "Fine, Max, if you don't want to have a drink, don't have a drink" and then I'll leave the room. Once he's sure I'm out of eyesight, he'll pick up the cup and drink.

Yesterday, we had a homework stand-off over a fill-in-the-blank word worksheet. For months now we have been using an amazing app, SnapType, that enables you to snap a photo of a document with your iPad or iPhone, then type text onto the image. (I bought the pro upgrade for $2.99, which lets you save a bunch of documents.) Only Max decided he wanted to hand-write answers. His penmanship is still in the early stages, and it rivals doctors' in terms of legibility.

"You sure you don't want to use SnapType?" I asked, and he was quite sure.

Halfway through the page, when we got to a longer word ("basket"), Max decided he'd done enough and tried to hand the pencil to me.

"Nope," I said. "You're doing it. Do you want to switch over to SnapType?"

He didn't. He wrote the word. A couple minutes later, he again tried to get me to write a word for him and again I said no. When we got to the final word, Max said he was done. When I pointed out there was just one word left, he started sniveling. Still, I wasn't giving in:

A tear rolled down his face. Melt went my heart.

I desperately wish these tasks, ones that most of us take for granted, weren't so difficult for him. I'm not going to do them for him when I know he's capable—but when he reaches a point of frustration, I have to give in...a little. 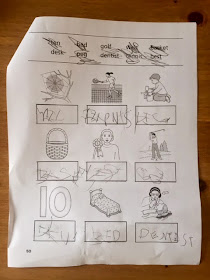