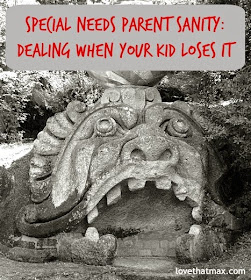 Closing my bedroom door as Max is standing outside it, irrationally screeching about something, while knowing full well that Max can't grasp the handle to open it is: 1) Evil 2) Semi-evil 3) Necessary self-preservation.

I posted that on Facebook last weekend after Max and I had a stand-off. He'd been looking at YouTube Disney Cruise videos on his iPad. I'd set the timer for an hour and when it went off, I told him he had get off the iPad. This tactic is usually effective, but not this time.

So then we went back and forth for a bit. First he did The Defiancy Shuffle, a move in which he shuffles his feet and whimpers to express his disapproval. When I didn't budge, he screeched.

The screeching used to be more of an issue, particularly when we were in public places and Max was overstimulated. Now it happens once in a while when he vehemently objects to something. He knows he needs to use his words, but when he gets worked up he melts down. I think it's because he is not able to verbalize what's going through his head as quickly or as emphatically as he'd like to, which adds to his frustration. Also, because he's not getting his way.

The screeching is seriously unnerving, and causes my own meltdown. It makes my heart race, my ears ring and my blood pressure rise. So I did what I often do: I headed into my bedroom and shut the door.

On the occasions I do this, I always feel a bit guilty. Not because I am taking a breather, which all moms regularly require, but because Max is physically unable to open door knobs. Although I realize this situation is no different than a mom of a child without fine motor skill issues physically turning the lock on a door, it always gives me pause when I hear him jiggling the knob, unable to manipulate it.

Still: I needed to decompress. STAT. And so did Max.

Max tried the knob, then he pounded on the door. And like the monsters in Where The Wild Things Are, my Max roared a terrible roar and gnashed his terrible teeth as I sat on my bed and took deep breaths.

I am evidently not alone here, because the vast majority of Facebook moms who saw my post agreed that moves like this are necessary for self-preservation.

"I've never spent so much time in the bathroom as I do now!" said Shannon F., who shared this pic of her kid hovering outside the potty door: 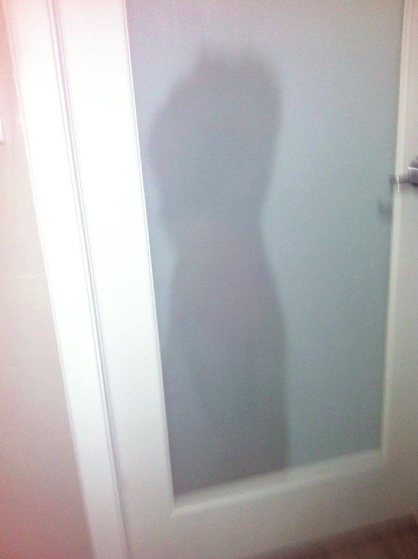 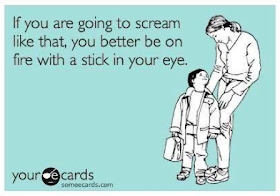 Other moms shared their own responses to dubious kid behavior. Said Jana W., "I ask my son (uses a wheelchair) if he wants to have his fits in his chair, on the floor, or on his bed then leave him to it!" Said Naomi S., "I walked out of my son's room tonight because I couldn't take the clapping and screaming stim. I just couldn't." Said Maggie M., "I've had to put Jaime in his bedroom and close the door because I couldn't take it anymore. Can't let yourself break or lose it on them!" And Erica Z., trying to assuage my concern that I was taking advantage of Max's inability to turn knobs, confessed, "I wait until my daughter turns to her one side (she's blind in one eye and visually impaired in the other) to walk past with something I'll know she wants, steal a bit of her snack, etc."

I usually only need five minutes in the bedroom to regroup. Meanwhile, Max typically walks away and when I open the door and go find him, he jabs a finger at me and gives a loud "UHHHHHH!" meaning "YOU JERK!" or whatever he is thinking, but then we're back to normal. Basically, we've both had a time out.

Jennifer H. offered this perspective: "Think of it as giving him more motivation to master that pesky doorknob! See, you are helping him, not avoiding him."

When Max is able to open doorknobs, I'll definitely be very excited...although it will mean I can no longer hide.