Hyperbaric oxygen therapy for kids with autism and cerebral palsy 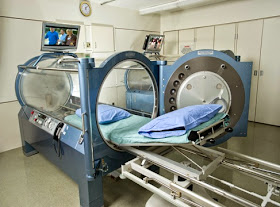 A growing number of parents are trying hyperbaric oxygen therapy (HBOT) on their kids with autism, reports The Wall Street Journal, believing it could be a part of the cure. One mom of a child with autism interviewed said that before her son, now 5, got HBOT in 2013, he communicated by screaming, biting and slapping. These days, she says, he can speak in sentences and dress himself. His treatment also included dietary changes.

The article didn't mention that parents of kids with cerebral palsy and similar disorders are also doing hyperbaric oxygen therapy. My friend Kate at Chasing Rainbows used to have a hyperbaric oxygen tent in her living room where she'd hang out with Gavin. For six months, starting when Max was nine months old, Dave and I brought him to a hyperbaric oxygen treatment center. The hope was that oxygen could spark dormant neurons in the parts of Max's brain damaged by the stroke. (Traditionally, HBOT has been used to heal divers with brain embolisms from decompression illness.)

Dave or I would lie down on a stretcher, with Max cradled in the crook of an arm, and the technician would slide it into the glass tube. Then she'd flick a switch and it would fill with 100 percent oxygen (compared to 21 percent in normal air). The air felt so clean, like you were in the Swiss Alps. Only, no, I was lying in a glass chamber next to my beautiful brain-damaged baby, desperate to help him however I could. Max was distracted by Thomas the Tank videos for the hour, and to this day every time I hear "They're two, they're four, they're six, they're eight," I picture that glass chamber.

There's been some research out there on hyperbaric oxygen therapy and children with cerebral palsy. One 2003 study done in India noted that previous research had shown hyperbaric oxygen treatment had been shown to improve gross- and fine-motor skills for children with CP, along with attention and language. This study found that, done in conjunction with occupational therapy, HBOT improved gross motor skills for kids with CP.

There's also been research on the benefits of hyperbaric oxygen therapy for stroke victims. In one small 2013 study done by Israeli researchers, 74 patients who had stopped improving six months to three years after their strokes and who HBOT showed visible improvements after two months including paralysis reversal and renewed language use. Brain imaging revealed increased activity. I'm no scientific expert, but perhaps other factors contributed to recovery—say, muscle memory that played into walking—something an infant who'd suffered brain damage wouldn't have.

HBOT is a hot field, and hopefully more research will be coming out. A university in Burnaby, BC, plans to start a brain-imaging study in 2016 on the effects of HBOT in autism patients. For now, caveat emptor, because there are surely plenty of medical spas and alternative medicine centers out there looking to take advantage of desperate patients. In 2013, the U.S. Food and Drug Administration issued a consumer alert stating that hyperbaric oxygen therapy "Has not been clinically proven to cure or be effective in the treatment of cancer, autism, or diabetes."

But proof isn't necessarily a concern for parents who've tried this. There are so few treatment options for kids with CP (and autism) that Dave and I felt we owed it to Max to try. Our neurologist thought it was worth a shot and after doing some research he didn't see any downsides, other than the cost. Sessions ran $150 a pop, although we got discounts for buying a bunch at once. Given that it's unknown how many treatments are needed, we decided to cap them at 40. At some point, insurance did pay for some of the costs; to this day I'm not sure why, since it's rare for insurance companies to cover hyperbaric oxygen therapy.

If you're considering doing hyperbaric oxygen therapy for your child, I think it's important not to get your hopes up. We didn't. We have no idea whether or not the HBOT helped Max. There were no astounding bursts of development, and we will never know whether it played into his cognitive or physical capabilities. But as we've always felt with treatments we've done for Max, if it couldn't hurt and might help, it's worth a try.