Attack of the shell creature: A true tale of modern motherhood 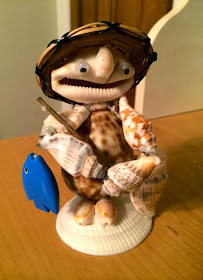 It was broken, just like I knew it would be. On the last day of our Florida vacation, as we roamed around a market, I bought Sabrina a little shell fisherman with a blue fish dangling off a pole.

"Wow, Mommy, it's made of all shells!" she said. She's about to be 10, and I'm glad she still has that sense of wonder and glee (although she is also master of The Eye Roll).

At some point as we hurried through the airport to get to our gate, a thought flitted through my head: Wonder where she put that shell thing, it's fragile. Cut to Friday night at 10:30 p.m. as we're unpacking. Or, rather, as I was unpacking and Sabrina and Dave sat in the living room watching TV.

Me to Dave: "Do you have the shell thing we bought for her?"

Sabrina: "I put it in the side pocket of Daddy's tote bag!"

I walked into the kitchen to the tote, which was sitting on the kitchen table, pulled the little bag out and opened the tissue paper to find that the shell creature's right arm and head had broken off, and the left arm was hanging on by a glue thread. Luckily, the face and body were intact.

I carried it into the living room.

"Sabrina, sweetie, it's broken," I said. And then, because she never takes care of her stuff, I gently added, "You have to be careful when you pack these kind of things, they break easily."

Instantly, I felt crappy. "I'll fix it!" I chirped, and bounded over to our junk drawer to get the Gorilla Glue. I had a gigantic pile of laundry to deal with, clothing to put away and a towering pile of mail to look through, but I was going to bring the shell creature back to life.

Figuring out which way the arm went back on was tricky; it's bent at angle, and I didn't spot any markings on the body from where it had come unglued. I decided to dab on glue and figure it out.
Working on the kitchen countertop, I put some on the right arm, glommed it onto the shell body and did the same with the head. Then I propped the left arm on the shell thing's protruding belly.

As always, I was determined not to get the glue on my fingers. As always, I had it on several fingers within minutes. And I had to rip one finger off from the shell creature because it had gotten glued to it before I could hold the pieces together so they'd set.

Gingerly, I carried the shell thing into the living room and said, proudly, "Look, I fixed it!"

Sabrina smiled. "Thank you, Mommy!" And then: "The head and arms are on backward."

Indeed, the were. The shell creature's shell feet faced one direction. It's shell head and shell arms faced another.

"It's OK, Mommy!" Sabrina said, reassuringly. "Nobody can tell."

Oh, but I knew that the shell creature was not right, and I was going to fix it.

I hauled myself back into the kitchen and started all over again at 11:00 p.m.. This time, though, the glue just wouldn't hold. I'd get the head on OK but then the arm wouldn't stick. I'd get the arm in place and the head wouldn't stay put. I am actually not bad at fixing stuff, but this was confounding me. I cursed at it a few times.

11:15 p.m. I pondered the person who'd put together the shell creature; we hadn't asked the vendor at the souvenir stand. He? She? Young? Old? How long did it take to make? Where did they get the shells from? Did they ever get frustrated?

11:25 p.m. I let out a big sigh. Nobody was around to hear it, though, because everyone had gone to sleep. For the next few minutes, resentment distracted me. Why was it me standing in the kitchen doing shell creature surgery? Dave would have never gotten around to it, which I knew because he hasn't gotten around to doing approximately 300,000 things on his fix-it list. Heck, Dave wouldn't have even noticed it was broken if I hadn't said anything. Dave would have forgotten all about this shell creature's existence! Why was I the only one worrying about the little things in life?! Why was I always the one up until all hours taking care of stuff for the family? Why was it always me who made sure we had supplies like Gorilla Glue in the house even if the glue wasn't gorilla-ing? Whywhywhywhywhy? [This is when I took a little wine break.]

11:40 p.m. Got it! The shell creature was once again whole. I carefully propped it up against a canister on the counter so the glue could fully dry, then I went down to the basement to grab a roll of paper towels. When I slammed the door closed, the head rolled off and the arm clattered onto the counter. "ARGH!!!" said I.

11:50 p.m. I'd been at it for more than an hour. Maybe, I thought, I should Google to see what a shell fisherman is supposed to look like, because it was possible I wasn't positioning the arm right. When you search "How to make a shell fisherman" you get results for making fish tacos, making fish out of little shells and making a shell wreath, but no shell fisherman. No luck with "Fisherman made of shells" either or browsing "Images." Where are the Martha Stewart tutorials when you need them?

I wasn't going to stop, though. This wasn't just about being Hero Mommy and saving a precious shell creature. This was about the return from vacation to reality, the one in which I often work too much and don't spend enough time with the kids during the weekdays, the one in which Sabrina has had to remind me to send in a school form because I forgot, the one in which I am on my phone a lot and Sabrina says, "Mommy, you're always looking at your phone!" and the one in which she also says things like, "You give more attention to Max than me." [Insert dagger into heart.]

This was about the guilt I usually repress that came to life in the form of a shell creature sitting on my kitchen counter and staring at me with its beady eyes. This was about one thing I could focus on for her, do for her and give to her, just her.

Finally, finally, finally, the parts were in the right (or right enough) place and the glue held. By then, it was 12:10 a.m. I carefully carried the shell creature upstairs, walked softly into Sabrina's room, left it on her desk so she'd be surprised in the morning and gave her a kiss on her cheek.

I went back to unpacking.