The just-deal-with-it school of life 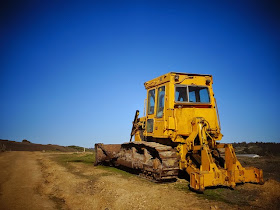 Friday afternoon, I had laparoscopic surgery to blast some pesky fibroids. Six, to be exact. One the size of a small grapefruit. Friday night, I went home from the hospital. Saturday and Sunday, I hung out at home and watched a lot of HGTV but I also forced myself to walk around as much as possible. Monday, I did some errands. Tuesday, I went back to work. Today: I'm OK! Mostly.

"I'm a little tired," I told my friend Jeannie at the office.

"Your body is recovering," she pointed out, matter-of-factly. Oh, yeah.

It's not that I don't have time to recuperate (although between work, the kids, yada yada I kind of don't). It's that I was determined to power through, because that's the way I was brought up. Forget just do it—I'm all about just deal with it. It's one of the traits that's most come in handy for raising Max.

My parents were both loving and nurturing, but also super-pragmatic and big believers in self-reliance. If I groused about swallowing the gigantic multivitamin pill, they'd remind me to drink it with water. If I was concerned about a school assignment, they'd point me to the encyclopedias in our den and encourage me to find the answers myself. Yes, I could take jazz dance but they weren't going to shell out sixty bucks for the recital costume, and did I want to use my allowance? No, we couldn't buy covers for our textbooks, we could make them out of brown paper bags!

There was no great adversity I had to overcome in my childhood, other than my father's temper, but my parents instilled a whole lot of practicality and common sense into me.  They made me believe that I could do anything I wanted to, if I applied myself to it.

My just-deal-with-it mentality kicked in as soon as Max landed in the NICU. I wallowed, to be sure. But in between sobfests, I started looking into treatments and researching doctors. I called Early Intervention before Max was even home. Things had gone out of control with his birth—nightmare level—but I was determined to do whatever I could within my power to help. Practically, I knew I had to. If not me or Dave, then who?

Deal-with-it me kept pestering the social worker at the developmental pediatrician's office to get me an appointment with him, even though he had a months-long wait list. (She did).

Deal-with-it-me figured out ways to influence the insurance company to pay for Max's speech therapy (have neurologist and speech therapist write dire letters about his need for oral-motor therapy to prevent choking).

Deal-with-it-me persuaded Max's old school to have him evaluated for a communication device, even though they didn't think he was ready.

Deal-with-it-me got him switched to a more progressive school.

Deal-with-it-me got Max a stem cell infusion at Duke University.

Deal-with-it-me jumped on the iPad and speech app his therapist wanted him to try.

I've tried to instill the same practicality and just-deal-with-it attitude in my kids. At times it's hard not to coddle Max, who struggles to do things independently. At night, we argue over brushing his teeth. He wants me to do it for him. He'll point to his eyes and tell me he's tired. I'll respond that we are not leaving the bathroom until he cleans his own teeth. I always win.

Oh, yes, I have determination; I like to think Max inherited his kick-buttness from me. But the undercurrent of it all is this belief that I can and will get through it, be it Max's needs or my surgery. And for that, I have my parents to thank.