Then I took my eyes off him, and it was OK 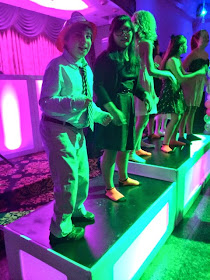 I could not believe what was happening: Max wanted me to help him get up on the stage. As loud music pounded and a crowd of people swirled around. It was sensory overload central and yet, he was having a great time.

Saturday, we went to the bat mitzvah of a daughter of college friends of mine. It was the first time Max wore a tie, and I was kind of dazzled by how cute yet grown up he looked. We've been to a few celebrations like this over the years with Max, with mixed results. Typically, he bails after a bit or decides he's not even going to enter the room. But no: Max walked right into the reception hall. It helped that he was greeted by this place card: 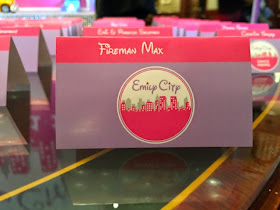 Sabrina signed our names on the big poster board in the front: Ellen, Dave, Fireman Max and Sabrina.  After we hit the buffet and Max downed his body weight in cocktail franks (me, too), the two of us wandered around. We walked into the dimly lit room where the lunch was being held and Max took a look and found our table. Then we went out and he watched a bunch of giggly tween girls do gymnastics and screech, and he told me they were being loud. The kids got called into the room before the adults, and Max headed inside. Boppy music was blaring. Max's headphones were in the car.

"Max, do you want your headphones?" I asked.

No. He didn't. What he wanted was to get up on the stage along with some girls who were dancing. I helped him up and stood nearby. Turns out he wasn't so much interested in the dancing part as in seeing himself on the big video screen. When everyone started grooving in the center of the floor, Max got down from the stage and stood in the center of the crowd, eagerly looking up at the screen. He was pretty easy to spot, given that he had his red Fire Chief hat on. (His motto: I don't leave home without it.)

It's traditional for the bat mitzvah girl and her family members to get raised up on chairs, and Max thought that part was amazing—he's told me he wants to do that at his own bar mitzvah. Thing is, he wanted to be lifted on a chair at this bat mitzvah, and I had to explain that he needed to wait till his own big celebration.

Max wasn't much interested in the sitting-at-the-table part of the affair. While everyone was downing their salads, Max continued to cruise around, charming the DJ and his team of dancers and trying to get on the video screen. Then kids did a big conga line and Max joined right in as I trotted alongside him, grinning my head off because it was a wondrous sight to see.

Max's balance is precarious at times, and I'm always worrying that he's going to fall right on his face, like he did the other week and got a fat lip. It's not easy keeping up with a conga line even if you're perfectly solid on your feet. But Max did fine, and generally seemed to be having the time of his life. 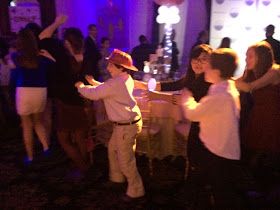 Then Dave took over and I sat down at the table to nibble on a roll and talk with friends. A few minutes later Max over and beckoned to me and again, we were on the dance floor. Sabrina and Dave joined us and we were all bopping around. Then Max and I hit the hallways again.

When we returned to the table (make that, when I dragged Max back to the table), our meals had been served and mine was getting cold. Max didn't care. The music had started up again and he wanted to get back out there.

I have a vision of Max from our last Disney Cruise, at a Chip and Dale dance party we went to one night. I took my eyes off him for maybe a minute and when I turned back around Max was lying on the floor; a group of kids had gathered around him. I helped him up and he was laughing, and Chip or Dale came over and patted him on the head.

That's the thing about Max: Traditionally, we do not let him out of our sight when he's out of the house. This was most intense when he was a tot and couldn't even be left alone in a room. In the playroom, he needed help grasping toys. At meals, he had to be fed. As he got older, we needed to help keep him steady on his feet. Max still needs assistance with bathing, brushing his teeth and getting dressed and undressed. When he walks up or down stairs, we have to be there behind him or in front of him. He's not a kid who can go to the fridge and grab himself a snack; we serve his food. He's not a kid who can retrieve a game from a shelf, although he's gotten good about unplugging the iPad and bringing it to the table (of course). He is never, ever outside alone. We also need to be handy to regularly respond, "Yes! You are going to be a fireman when you grow up!"

Being ever-vigilant and ever-on is one of the biggest demands of special needs parenthood. Max needs me or Dave, much like a younger child requires supervision and help. This is the way it is and I don't think about it much. We're not usually in situations where Max is chomping at the bit to do something independently and I have to decide, although I think that will change as he gets older.

Last Saturday, though, I let him go. Right onto the dance floor. Because if I couldn't do it there, in a crowd of friends and nice people, where could I? I sat there and talked with my best friend and nibbled at my fish and sweet potato purée, even as my eyes drifted to the dance floor to see if I could spot him. I couldn't.

He was fine. I can't even tell you how good it felt to let down my guard.

Max was excited about the retrospective slideshow, and sat cross-legged on the floor with the rest of the kids. Then he decided he wanted to see where the videos were streaming from, and asked to go to the booth behind the stage. Right after I lifted him onto it, a man ran over and gave me a bear hug. I didn't recognize him, and wondered if we'd gone to school together and he just looked really different.

He released his grip and said, gripping my shoulders, "I just wanted to tell you that my sister has a child with severe autism and you are an amazing mom."

I was taken aback, as I often am when people give me compliments for caring for Max because really, what choice do I have? Also, I don't think I would have gotten any parent-of-the-year award for the thought going through my head right before he hugged me, which was, All I want to do is go back to the table and have dessert.

"He has cerebral palsy," I blurted. "But thank you."

He patted me on the shoulder and I dashed off to grab Max's hand and help him down the stairs to the video center. We hung out there for a half hour, and the guys were really sweet and let Max help maneuver some controls.

Before the end of the day, Max decided to hit the photo booth. He didn't want any of us in the pictures.

And that was pretty great, too. 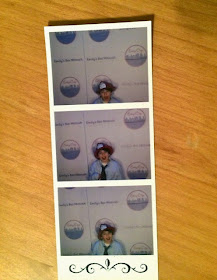