How to give your kid with special needs superhero confidence 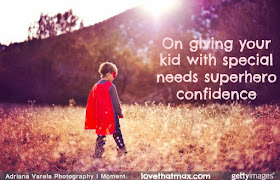 I already think Max is a superhero in so many ways. Throughout his life he has regularly wowed me with his ability to leap over obstacles in a single mental bound, his determination to power through challenges and his way of staying colossally cheerful throughout it all. Still, I am all for taking his confidence level to new heights.

"Wow, you did a great job walking down the stairs slowly and staying balanced," I'll gush.

"NICE TRY!" I'll squeal whenever he's figuring out a new math equation. "You are such a smart guy. You'll get it."

I also dole out plenty of props to Sabrina, too; I want her to grow up thinking she's a superhero, too. I try not to get overly enthusiastic about Max when she's around. But Max is a kid who needs extra confidence to carry him through life; he will face obstacles Sabrina and his typically-developing peers will not.

I want him to feel confident about doing the best he can.

Sometimes, Max gets frustrated when he's not able to articulate words. Yes, he loves the speech app, but on occasion he is determined to articulate stuff and he refuses to type it out. He's at the stage where he thinks it's our problem if we don't understand what he's saying; he's been known to lean in closely to my ear and say whatever word or phrase it is more loudly because he's thinking I can't hear him. Even when Max grows out of this, I don't ever want him getting frustrated with himself for his speech or any other challenges, or see them as failings. It's why I praise his efforts as much as I praise his wins. It's why he gets props for coloring outside the lines.

I want him to feel confident about moving at his own pace.

On occasion, during my work commute, I will end up behind an elderly person who is taking their sweet time getting up or down stairs. I will catch myself internally rolling my eyes, in my rush to get to work or get home to the kids. And I will suddenly feel awful for my lack of patience—and acutely aware that this could very well be Max someday, meandering along amidst people in a rush to get wherever they are going. And I want to make sure he is perfectly OK with moving at his own pace as others move at theirs. It's why we leave extra time for activities or to get places, so we never have to rush him (although lately, it's Sabrina who's holding us up because she's in the bathroom gazing at her hair).

I want him to feel confident enough to ignore the stares.

Right now, I'm the one who notices if other people stare at Max when we walk down the street (and who at times gets worked up about it). When Max someday becomes aware of the looks, I want him to have the self confidence to believe that something is wrong with the people who blatantly stare, not with him. Bolstering his sense of competence will help him deflect the stare-glarers. And if he grows up to think that people are looking at him because he's so handsome, well, that would be rather awesome.

I want him to feel confident about his strengths and talents.

Max is a charmer, that's for sure. He has a high Emotional IQ—he's very perceptive about people's moods. When he can tell that something is weighing on my mind, he does this little wave at me that always makes me smile, and I thank him for cheering me up. He also has a great visual memory, and is the person in our family most likely to remember how to get somewhere. I call it GPM (Global Positioning Max). When he recently informed me I was going in the wrong direction on a highway and I quickly realized he was right, I laid it on thick: "Max, you have the best sense of direction! You are better than me and Daddy and Sabrina!" And he beamed and said, "That'll be twenty bucks." OK, he didn't actually say that but one of these days, he just might.

I want him to have the confidence to stand up for himself.

I've been the mama warrior since the minute we found out Max was having seizures in the NICU. He's not yet at the point where he can speak up for himself if, say, a program is excluding him. But there are baby steps I'm taking to helping become his own champion, including getting him to understand what his disability is and having him sit in on his IEP.

I want him to feel confident in a world that isn't always comfortable with differences.

I have my own way of dancing, which basically involves moving my hands and shoulders a lot. Dave does a shuffle. Sabrina jumps around a lot. Max likes to do this surfing move. Chances are if someone were to watch all us on a dance floor, Max's moves might seem the most "different" because of his spasticity (I'm not calling him names, I'm referring to the way the cerebral palsy stiffens his muscles) even though each of us has our own unique style. Max is more likely to be attract attention throughout his life because of his physical and cognitive differences. And I want him to feel good about his dancing, his way of walking up and down stairs, his way of holding things and of speaking—his way of doing everything. If you're comfortable in your skin, you can handle the confidence busters that may come your way. If you feel like a superhero, then nobody can bring you down.