The cognitive development: so hard to track, so gratifying to see 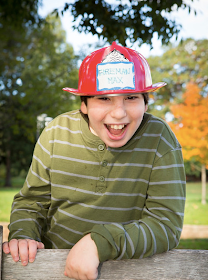 "I see big changes in Max's cognition," the photographer said to me. For the last several years, we've hired Yasmeen to do a family photo shoot in the fall, so she's known Max since he was 8.

I asked what she was seeing.

"He's directing me what to do!" she said. And, indeed, Max was. The deal I struck with him days before the shoot was that he would do a bunch of photos without the ever-present Fire Chief plastic red hat on, and then we'd finish up at the fire station with the hat on. Only Max had other ideas, and for every single place we stood and struck a pose in the park, we had to do two versions: One with the hat, one without. There was no getting around it, so we just went with the flow (generally good advice for parenting a kid with special needs).

Her comment made me happy. The unsolicited ones are the best, especially coming from people who don't see your kid that often and who truly notice the changes. Observations about Max's cognition are particularly welcome. Max has plenty of smarts, something that people don't always readily perceive because of his speech challenges. Me, I wonder a lot about what's going on in his head. His iPad has enabled him to share more thoughts but still, I know there are many more. His cognitive development is a mystery waiting to unfold.

Max has made some great cognitive leaps forward this year. The reading and math comprehension are progressing; I see it in the school progress reports, too. He understands more of what Dave and I talk about, so that we can have good conversations (even if they are usually about fire stations). And his curiosity is thriving; he now regularly asks "What's that?" whether it's regarding a box that came in the mail or buildings we drive by. This is particularly heartening; kids learn so much from wonder. Adults, too.

Max also has a high emotional IQ, which can be every bit as important as good old IQ. He is very perceptive about moods. Dave and I had an argument while we were all out to lunch this weekend and as I shot him a look, I noticed Max watching me. He gave me this little wave, which he does when he wants me to laugh, and I obliged because it's just too cute to resist. It broke the tension. Max knew just what to do.

Lately, Max is interested in exploring his past. Saturday morning, he got up at 6:15 a.m. and when he tried to wake up me and Dave and we told him to go back to sleep, he wandered back to his room and turned on the light. I figured he was playing with fire trucks, but when I went in to check on him a half hour later he was sitting on his bed, flipping through one of his baby photo albums.

Years ago, when Max got his stem cell infusion at Duke University, we saw a pediatric neurologist there who commented on the brightness in Max's eyes. I've always seen that light, as have friends, teachers and therapists. I see the smarts emerging in little ways every single day. Yasmeen the photographer only sees Max once a year. And it is so gratifying that, through the lens of time, she can see the progress.

Photograph/Yasmeen Anderson
Ellen Seidman at 6:39 AM