The boy I hear in speech therapy 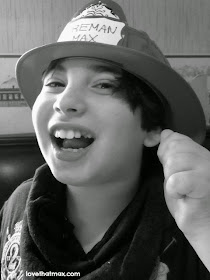 "Mmmmmmmommy!" says the speech therapist. She and Max are seated at our kitchen table. J has been coming to our home basically every Saturday morning for the past seven or so years. Max's attention span used to be spotty during their sessions, but in the last year he is totally focused—and the sounds he makes are wondrous.

"Mmmmmmmommy!" says Max, and I smile. I'm hovering in the living room and listening in. Max doesn't like me to sit with them. In general, Max doesn't like to let on that he is able to do more than he shows me and Dave. He is all too comfortable not trying his best around us and I'm pretty sure this is because he is used to letting us doing the work, like guessing what he is saying—and glad for it.

If I wander into the kitchen during speech therapy, Max will say "OH!" and point to the door and then the speech therapist will say "GO!", effectively enabling him to kick me out of the room with the proper articulation.

The consonants are the hardest for him; too bad there are 21 of them, and five vowels. The therapist often uses Chewy Tubes and Bite Blocks to loosen up his jaw before she starts getting him to talk. She's also used Nuk Massagers and Jigglers over the years to reduce oral-motor sensitivity. I don't use those to help him as much as I could or should, so in some ways it's no surprise I have trouble recreating the sounds she gets. But also, Max just doesn't give me his speech all.

It's been this way in physical and occupational therapy sessions, too, over the years. But it's most noticeable in speech therapy, the area that is probably his biggest challenge right now.

Lately, J has started giving us a word of the week to practice. Last week it was "Mommy" (perhaps the most fabulous word in the entire English language) and Max got really sick of me telling him, "Mommy! Max, say 'Mmmmmmmommmmy!'" He finally staged a momcott and just kind of grunted at me.

Yet there's much awesome. Because Max makes sounds, all sorts of sounds. Especially when he's in the bathtub, and babbling away. Or making videos of himself talking, as he loves to do lately. And he has words. And we're eons away from those days when I'd drive around with Max and I kept praying I'd hear babbling or any speck of sound from the back seat but, nothing, and I'd feel so anxious.