Hey, Kanye West: Being closed-minded is a disability, too 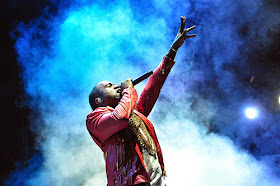 "I can't do this show until everybody stand up," Kanye West told his concert audience in Sydney on Friday night. "Unless you got a handicap pass and you get special parking and s**t."

This is not a guy known for his tact, but this weekend it was his ignorance that made headlines.


The concert was the last leg of Kanye's Yeezus tour. As you can see in the video, after most people stood Kanye noticed two people still seated and called them out, refusing to get on with the show until they got up. It's hard to see in the video but the Daily Mail Australia has a photo of a person waving a prosthetic leg as proof. "OK, you fine," said Kanye, like he was...Yeezus. After his bodyguard confirmed that another person in a wheelchair couldn't stand, Kanye went on to perform.

Kanye had the same mandate at his recent Melbourne show, The Daily Mail reported, asking people to stand up "unless y'all sitting down because y'all handicapped."

The guy who posted the clip on YouTube called it a "misunderstanding." One commenter thought the clip was "taken out of context." Another said it was an "honest mistake."

Clearly, Kanye didn't realize that the people he'd spotted could not stand up. But his misunderstanding is beside the point.

How crappy of Kanye to call out his fans with disability and to exclude them on the basis of their physical abilities, a dishonor they paid for. He didn't think it might be insulting to say what he did, twice? He didn't care? He couldn't think of a cooler way to engage an audience? There are plenty of ways to show the love at a concert, although I guess having people shout or wave their hands or, heck, just show up wasn't enough to appease his ego. It was also seriously crude of him to define disability as anyone who gets "special parking and s**t."

I have another definition of disability: being this closed-minded.

Kanye got good press a few months ago when he gave a mic post-concert to a guy in a wheelchair who couldn't see the stage. But one gesture (and really, it would have been more decent of Kanye to move the guy to a better seat) means nothing once you understand that his mindset is all wrong. This is a man who once rapped, "They tryna put me on the school bus with the space for the wheelchair," as The Daily Beast notes.

I haven't yet come across reactions from the people with disabilities who were at the concerts so who knows how much this did or didn't faze them, despite the disgust others have felt. Perhaps Kanye's publicist will encourage him to apologize (he's no stranger to apologies). At the very least, to look at ye olde bright side, this incident has gotten people talking and thinking about how people with disabilities deserve to be treated: like any other concert goers, like any other human beings.