A kid for just a little longer: The joys of parenting children with special needs 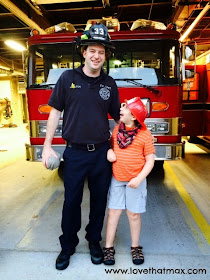 Max giggles. I have just informed him that, yes, he is going to be able to have his birthday party at the fire station. Well, not technically. First, I'll be renting out a room in the civic house across the street, and after pizza and ice-cream, the kids head over the firehouse for a tour. Max will surely be leading it, of course, given that the firehouse has become his home away from home.

It's not every 11-year-old boy who gets this giddy about birthday parties or visits to firehouses. Or who walks around all weekend long with a fire chief hat that reads "Fireman Max" or who regularly tells everyone he meets, "I want to be a fireman when I grow up." When we visited the station last week, he was so excited to see his favorite guy, Firefighter Connor, that he ran up to him and gave him a gigantic hug.

Max may be 11 years old, but he still has plenty of little-kid wonder and glee. It makes me a whole lot happy. That's kind of ironic, because when he was a tot I ached to see what he'd do when he got older, and now that he's growing up, I am loving the little kid left in him. Yes, there are times when I see him around other kids his age and I realize how much younger he is in comparison, and I'll feel a flash of sadness. That's it, though, just a passing moment. Mostly, I'm thinking this: I get to savor his childhood for just a little longer.

A little more time to revel with him in joys big and small. Max isn't yet jaded about anything. He has not yet mastered The Eye Roll. This is a kid who literally does a happy dance when I tell him that we are going to the ice-cream store in town. He excitedly points out his favorite kind of car, BMWs, when we are on the road. He has a fantasy trip planned with Dave that includes a ride on a ferry, a stay in a big hotel and a pancake breakfast. He thinks toy fire trucks, Thomas the Tank, bumper cars, pushing the shopping cart at the supermarket, avocado sushi rolls and all things Disney are really cool. And the genuine excitement he expresses is contagious.

A little more time to enjoy watching him discover the world. Lately he's exploring it in ways that he didn't when he was younger, venturing into restaurants, museums and even concerts that used to intimidate him because of the din.

A little more time to be openly adored, and to adore him right back. When I get Max off the school bus in the afternoon, he beams out at me from the door. When I show up at his school to pick him up for a doctor's appointment or to participate in an event, he is ecstatic. He has no hesitations about expressing love, and he isn't embarrassed if I shower him with kisses. And I will take whatever mush I can get.

A little more time to revel in firsts. They're still coming: First time he wrote his address by himself. First time he stayed dry overnight. First time he poured cereal on his own. At this point in his life, there are no more delays. There are only firsts.

A little more time to watch him being naughty. Because as irksome as kids are when they're acting out, there is something very delicious about watching them experiment with pushing your buttons. The other night, I was telling Max something he didn't want to hear (he'd been getting a little impatient with a therapist). So he started tipping over a pile of papers I'd left on a chair, one hand on the papers, both eyes on my face to gauge my reaction. He knew exactly what he was doing. I had to stifle the laughter and tell him not to do that but...delicious.

A little more time to hear his squeals. Oh, the squeals. They are the purest form of joy. I can ride the wave of bliss one of those squeals brings me for hours afterward. (Depending on how soon they are followed by whining, that is.)

A little more time to play out fantasies. Max is convinced he is going to be a firefighter when he grows up. We talk about it every day: Which firehouse bed he will sleep in (the one by the TV), what he will make for dinner for everyone (mac 'n cheese with ketchup). He believes. And when I listen to him gush about his future life as a firefighter, when I see him clomping around in his firefighter boots and gear, I think, Who am I not to believe?

I say "a little more time" but the truth is, I don't know how much longer Max will be like this. Maybe it will be years. Maybe some of these traits will be for always. How will I feel if, at 18, he's still walking around in a plastic fire chief hat? At 25? I can't say for sure. But no matter what, he will be Max, a child who has brought me joys of all kinds, and always will.