That sad you feel when you think about your pregnancy 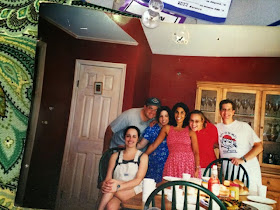 Dave and I went out for breakfast yesterday morning, an unusual work week treat, and bumped into the woman who lived in our house before we did. We were happy to see each other; we shared a love for our house, and she'd been so warm and welcoming when we were going through the sale. I was a nervous first-time homeowner and hormonal preggo woman; I was five months pregnant with Max when we moved. She'd kindly let me in to take measurements to make sure all our furniture would fit, and given me various pointers about where to buy stuff and good places to eat in the neighborhood.

We talked about the house, and how the beautiful flowers and greenery she'd planted comes up gorgeous every year. We discovered that living in a house was a first for each of us, as we'd both grown up in apartments. We talked our kids. She had four, and it had seemed so extravagant to me at the time that we were going to be a family of three living in a house that had held a family of six. (Of course, then Sabrina came along as did a whole lot of STUFF that has filled every single storage space available, and then some.)

"How is your boy doing?" she asked, looking concerned.

We've bumped into each other over the years, and she knew that Max had a stroke at birth.

"He's doing really, really well," I said. We discussed his school (she'd heard of it), and how Sabrina and her kids, now all grown up, were doing. We agreed that the years zoom by.

We exchanged emails and promised to keep in touch; I told her she or the kids were free to stop by the house anytime. Dave and I ordered at the register, and sat down at at table.

"Isn't it so nice to see her?" I said, and then a wash of emotion overcame me and my eyes filled with tears.

When I see this woman, I think about my pregnancy with Max, and how thrilled and filled with optimism we were—and how we had no clue what would happen to him. It's the same way I feel whenever I glance at a photo hanging in a bulletin board in our kitchen snapped on a day friends came over for our first barbecue at the house. It's similar to how I feel when I look back at Max's birth, before he ended up in the NICU.

I've accepted that the grief will always be a part of me. And that, rationally, it's out of sync with the reality of my Max—because I can't imagine having any other child, nor would I want any other child. There's no rationalizing grief, though. It's subsided as the years have passed, in terms of the moments happening less often. But when they do, they are just as intense—a shock to my system, something I cannot control. My chest tightens up. The tears rise.

The sadness doesn't hit Dave in the same way, and he's always able to draw me out of it. He brought up the time, after we signed the contract on the house, that we were so excited we drove over at around 11:00 p.m., parked across the street and just stared at it, until the husband looked out a window and spotted our car, and we quickly drove off, giddy house-stalkers that we were. Then we moved onto other topics of conversation, and within minutes, the sadness dissipated. Dave brought over my waffle and his omelette.

I waved to her as we headed out of the restaurant.