The shocking realities of raising children with disabilities, and why society needs to know

If you would have spotted me and the kids when we hit a sushi restaurant this weekend, this is what you would have seen. I sat next to Max, tucked two cloth napkins into his shirt collar and spread two on his lap. I crumbled his avocado rolls and plopped them into his miso soup, because they're easier for him to eat that way. Then Max did his best to hold the porcelain spoon. He insists on using it, rather than one of the adaptive spoons I tote in my purse, but he kept dropping it because the narrow handle is tricky to grasp. Meanwhile, the napkins got sopping wet. "Do you want help?" I asked, finally. "Yes!" he said. Then I fed Max the rest of his meal.

If I didn't have a child with cerebral palsy, I might glance curiously in a restaurant, too. It's unusual to see an 11-year-old kid being spoon fed by a parent. This partly explains the ongoing buzz about NPR's recent story on two aging parents carrying for their teen with cerebral palsy. Written by Katie Orr, Destined to be Caregivers did not hold back on the realities of parents James and Judy Lee and 16-year-old Justin: the diaper changes, the daily stretching of his muscles, the regular flow of therapists in and out of their home, him sleeping in their bed so they can keep an eye out for seizures.

What riled some people up was a photo of James carrying his son, naked except for a diaper. Photographer Andrew Nixon summed up the response on Twitter: 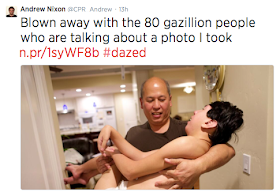 A lot of us, especially parents of children with disabilities, saw only love in the photo. Some noted these parents "unconditional" and "selfless" care for their son. As commenter Christine Hoang said on NPR's Facebook post, "Many people are focusing on the son's undergarment. When I saw the picture, my focus was on the father's face. He appears loving, gentle and even perhaps happy. He and his wife love their son, and in the midst of their hardships and sacrifice, they also find the blessing and the joy in behind is parents—and that is the essence of good parenting."

Some suggested they would never "force" a child to keep living that way. This is a whole other story; people often fail to understand that these are our children, with their unique needs, and we love and care for them because we are their parents and that is what parents do. Judy Lee jumped into the comments on NPR.org, noting that Justin is alert and happy, enjoys his friends, music, TV and swimming and many other parts of life. As for those people who thought they should "let him go," she said it "would be nothing short of neglect and murder. He's a healthy young man, for which we are eternally grateful. His life is cherished...."

And then, there were those who objected to that photo—a violation of Justin's privacy that compromised his respect and dignity, they said. They felt NPR could have chosen other photos. They wondered whether Justin would have wanted to run that photo. This from a society that is obsessed with reality TV, and all its invasive spectacles.

James and Judy Lee were fully aware that a photographer was documenting their family. As he noted in a post NPR put up about the photo, "We tried to get a wide range of experiences that the family went through. And part of that is bathing your son, because he can't do it himself. The Lees were very comfortable being photographed.... His parents demonstrated pretty thoroughly that they really have his best interests at heart.... I think the photo served the purpose of showing a father taking care of his son. If it was just Justin, I think that would have been disrespectful. It would have crossed that line."


The truth is, the realities of raising a child with physical challenges are often not pretty, however lovingly they are handled. They involve bodily functions and fluids that people typically associate with infants and the elderly: bed wetting, butt wiping, drooling, spoon feeding, sponge bathing. There are plenty of people who are already uncomfortable with people who are disabled; these details may make them really squirm, perhaps why some of them hyper-focused on that photo. If there was a shot of Justin being carried, say, on the beach in swim trunks, they probably still would have felt unnerved.

Most of the online comments I read from parents of kids with special needs pointed out the same thing: People don't know what's it's like to care for a person with disabilities. As mom Ellie Lawrence noted on the Parenting Special Needs Magazine Facebook page, "I think some people...are afraid of knowing what we as parents have to do.... I was giving some water to my son through his g-tube in public one day and all you could see was his tube, his shirt covered the rest, and a woman said 'That should be done in the bathroom or at home' and before I could say anything the lady's own child said, 'Mom he's thirsty, I don't drink in the bathroom, why should he?' Out of the mouth of babes."

In agreeing to participate in the NPR story, the Lees did what other parents of kids with special needs regularly do through blogging and social media: let people in on their lives. Although I can't speak to why these parents did this, I'm betting they believed that giving others a glimpse into their daily existence would be in the best interests of their son. Perhaps they want to raise awareness about the dearth of financial assistance and resources for people with disabilities. Judy Lee receives about $10 an hour to care for her son, as part of California's In-Home Supportive Services. This month, proposed budget cuts could slash the amount of hours for which she receives compensation in half.

Sharing our families' lives is one way to get a discussion going and bring about change. Revealing what goes on behind the doors of our homes is hardly disgraceful; what's disgraceful is for kids and adults with disabilities to remain a forgotten part of society.