Better than it used to be 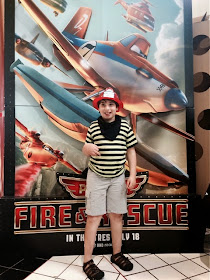 "It's amazing—we had a family dinner and a movie night out," Dave said as we all drove home at 9:00 last night. We were both incredulous.

Max has been planning to see Planes Fire And Rescue for months now. He had me write the opening date, July 18, on our kitchen wall calendar. He kept telling me he was going to see it at our local movie theater, the only indoor theater where he's ever seen movies (starting with Monsters University last July). Unfortunately, the movie isn't coming to our theater till later this month. Max said he'd wait.

The fact that Max is game to even see a movie in a theater is still a thrill. That's one of the awesome things about Max's maturity: Dave and I know how far he's come, and it makes even the most ordinary family activities that much more incredible.

Starting with dinner. Max is on a sushi kick. And he not only wants to go out and have sushi, he wants to try new restaurants. This from a kid who for years would only go to our local diner and only if he could have the booth in the back, by the bathroom. The waitresses used to save it for us.

So we went to a new sushi place. It was right next to an AMC. Max asked Dave if Planes Fire And Rescue was playing there and yes, it was, in a couple of hours. I asked Max if he wanted to go check out the theater. He asked if we had headphones, but no, we didn't. He went in, anyway. He posed in front of the big promotional sign. I asked the guy taking tickets if Max could just peek into the theater, number three, and he said OK.

Max poked his head in. Another movie was playing. He scoped the theater out and seemed satisfied; the noise level wasn't too loud. I asked if we should buy tickets. "YES!" he said. Dave got four (and asked if we could get a refund, if necessary).

We went off to have sushi. Max downed his avocado roll, dunked in miso soup, and kept asking if it was time to see the movie.

Even after Max started venturing into different restaurants, it was hard to keep him at the table once he'd finished eating. Last night, he finished and when he stood to leave we pointed out that the rest of us  weren't finished. He sat down again. Then asked if it was time yet to leave.

Finally, it was movie time. Max chose to sit in the last row of the theater. Because he's only ever seen indoor movies with me, he wanted me to sit next to him and asked Dave and Sabrina to sit somewhere else. That was fine with them.

So Max and I watched the movie, him with his Fireman Max hat on, as usual. He was mesmerized; the plot's about a plane that trains to become a firefighter, like it was written for him or something. Twice, he stood and looked way up at the projector, fascinated. A bunch of times, he'd turn to me and remind me that he was going to be a firefighter, too. I was a far more engaging companion than Dave, who took a nap during the movie, Sabrina reported en route home.

I sat in that theater and thought about those times when we tried to get Max to go to movies, and he'd screech if we even set foot inside the lobby. I thought about last summer, when he stood in the back of the theater the entire time, earphones firmly on, afraid to sit down. I held his hand, still plump with dimpled knuckles, and it was so relaxed. Max's muscles loosen up when he's really and truly immersed in something.

I watched Max watching the movie and felt glad that he's enjoying more activities than he used to. I felt happy that we're able to do more stuff as a family. It's all relative; life with Max is so much easier than it used to be. And knowing that makes our present that much more enjoyable.

I do this fairly often, reflecting on how much things have changed. I'll watch Max feeding himself and think of all the years when we fed him every meal. Max asks to go to the bathroom as we're running errands and I'll picture us changing his pull-up in the open trunk of the minivan. Max says a word or picks up something or walks up the stairs and I picture when he could not.

Who knows what the future will bring. I can't control that—not making the joys happen any sooner than they're meant to, or heading off the challenges. I'm celebrating that the past is just that. And I'm savoring the here and now, just like my Max. 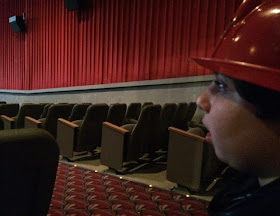