The Oscar Pistorius trial: When disability isn't an excuse 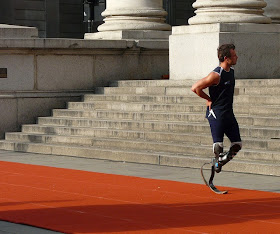 "Can I ask you a special needs question?" a friend said. She went on to tell me about a child with autism she'd seen at a local playground who had a habit of pushing other kids out of his way. On recent weekend, the playground was filled with kids and as my friend watched, the boy zoomed off a slide and shoved another boy as he ran by.

"You should have seen what happened five minutes ago," a dad standing nearby said. The child had pushed another kid, and his mother had approached the father. It was unclear what she had said to him, but the father's response had been, "Calm the eff down, he's autistic."

My friend wanted to know what I thought. My first reaction was, special needs is not an excuse for letting a child shove around another child. Obviously, some kids are prone to acting out because of their diagnoses. My friend said she later watched this father practically wrestle his son to the ground in an attempt to control him. But as parents to kids with special needs, it's our responsibility to make sure our children aren't a threat to others or themselves, as best we can.

I was thinking about that story this weekend, as the Oscar Pistorius case makes headlines and his disability is coming into play. The Olympian, a double amputee who runs on carbon blades, is on trial for killing girlfriend Reeva Steenkamp last year; he supposedly thought she was an intruder when he shot her four times through a wooden bathroom door in his house. When Pistorius testified back in April, he noted that he feels unsteady on his "stumps," as he calls them. "I don't have balance," he said. "I have very limited mobility." He keeps his blades by his bed, and puts them on once he wakes up. His team says he was not wearing them the night Steenkamp died.

Last week, a key part of the trial revolved around the psychological ramifications of his disability. Pistorius's lawyer made the case that there are two Oscars, "One of whom was a global sports star and one of whom was 'vulnerable' and 'scared.'" When Doctor Wayne Derman, who spent years working with the athlete, took the stand he said, "The saddest thing I have learned through my six years of working with athletes with disability is that disability never sleeps. It's there when you go to sleep at night and it's there when you wake up in the morning. It affects nearly every aspect of your life." He noted that he has seen "exaggerated fight or flight" responses in people with disabilities that he has not seen in people without them.

This line of defense has riled disability rights groups. "Frankly, I think there's a little bit of exploitation of his physical disability to say that it's linked to some mental health issue that would cause him to commit murder," said Carol Glazer, president of the National Organization on Disability. "It's too much of a stretch." Noted Henry Claypoll, the executive vice president of the American Association of People with Disabilities, "The bottom line is I don't think you can justify these actions by his having lived with a disability."

So, there, two wholly different circumstances in which disability has been used as an excuse. I am not unfamiliar with that. When Max has screeched at restaurants or events, I've had to explain his sensory issues—although we remove him from the setting, so as not to disturb other people. For awhile, he had this habit of kicking seats in front of him on planes, and we'd have to explain why as we tried our best to muffle the kicks or stop them. Again, his sensory issues were the reason, but I never considered them permission to let him act however he wants.

I've struggled with Pistorius's defense. This is a gutsy, formidable, accomplished pro athlete; he didn't get where he is without being a fire breather. To me, he's always been an amazing example of someone who's showed the world the ability in disability. In a video leaked this weekend that shows Pistorius re-enacting that night, he looks pretty solid on his "stumps." I sure don't know what it feels like to not have on the blades you use for legs and think your home was being invaded (if that part is true), but I am not comfortable with that as justification for murder.  Of course, when you're on trial for murder, you pull out all the stops; blaming a disability, even that of a world-class athlete, plays into misguided societal beliefs that the disabled are weak and vulnerable.

In the end, Pistorius's fate lies in the hands of the judge, who will decide whether Pistorius made a mistake and if so, whether his response was reasonable (jury trials were abolished in South Africa in 1969 out of concern of racial prejudice by jurors). Yet no matter what the outcome, the image of people with disability may have already sustained damage—among people who think they exploit their challenges, and by those who see people with disabilities as victims.