Spring is when the children bloom 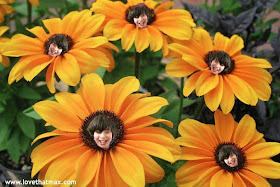 The tulips are out in our backyard and all over the neighborhood. The kids are out now, too. I see them when I walk home from the train at the end of the workday, riding their bikes, running around, playing catch. Kindergartners who've morphed into big kids are shooting hoops, and big-kids-turned-pre-teens are riding their skateboards. Everyone looks remarkably older and more mature.

Last night two boys zoomed toward me on their bikes, laughing and pumping their legs as fast as they could. They're a little younger than Max. Two friends, out enjoying themselves and the freedom of being sprung from winter. I stared at them and my heart twinged. They seemed so different than Max.

To be sure, Max is out there on weekends, riding his adaptive tricycle up and down the street like a speed demon. But it's under our watchful eyes: He is not a kid who can go cruising around the neighborhood, alone. He doesn't have a neighborhood friend to do that with, either.

It's been eleven springs now that I've watched these kids blossoming, eleven years since Max was born. Yet the burst of kids outdoors still gives me pause. Seeing the boys at play—and it's always the boys—makes me acutely aware that Max isn't one of them. And that remains a source of pain: Max would have been one of those boys if he hadn't had a stroke at birth.

When Max was little, the compare-a-thons happened all the time—at the park, at the mall, basically anywhere there were kids. Birthday parties were a special form of torture, me sitting and holding a non-talking, non-crawling Max on my lap as friends' kids babbled and toddled by. Me feeding cake to Max because he couldn't yet grasp a spoon as the other children dug in. It wasn't just that I felt Max's differences—I felt so different, too. I was experiencing a very different kind of motherhood from those other moms. I felt so alone in a roomful of happy, chattering parents and babies.

Eventually, I learned to focus on what Max was doing; comparing him to other kids didn't do either of us any good. The passage of time and Max's progress both helped. On days when I felt anxious, I'd email his therapists and ask for pep talks on stuff Max was accomplishing. I'd dress Max in this navy velvet sailor suit we'd gotten as a gift when he was born, prop him up with pillows on our bed or couch and do photo shoots to remind me of his cuteness (not the least bit delayed). I accepted that Max was growing on his own timeline, and nobody else's.

A few weeks ago, some women who don't know our family that well visited. Max said some things to me and I translated: "He'd like you to know he's going to be a fireman" and "He wants you to come upstairs and see his room." One of them remarked, "Wow, you understand him!" I answered, "Yep, I speak Max!" Of course I do: I'm his mom. To me, Max's verbal and other challenges are a normal part of who he is. Navigating them is a normal part of our lives. To me, in many ways, Max is very much like other kids, a boy who's bright, curious, funny, who loves to play and eat his body weight in mac 'n cheese. See our kids' abilities, not just their disabilities, is a message I often share here.

That's why it's so jarring when I wonder what Max would be like if he didn't have cerebral palsy. I'm surprised—no, shocked—that my mind still goes to that place at all. And that it still hurts.

Max is blooming, too. He's getting so much bigger; his arms and legs are hanging out of the PJs that fit him last fall. He's made impressive cognitive and physical progress this past year: He understands more. He's bolder about trying new experiences, like going to movies and restaurants (well, other than the times when he runs out screaming). He's walking downstairs much more steadily. He's better able to grasp stuff. His reading and writing are improving. I can have conversations with him, no matter they are usually about Lightning McQueen and his newfound desire to be a fireman.

Those boys on the bike passed me and for a couple of seconds, I could still hear their laughter. And then, they were gone. I walked to our block, passed our walkway with the pots of orange and hot pink ranunculus, unlocked the door and walked in. Max was sitting at the kitchen table, and his face lit up. "Hi, Ohmmy!" he said. And the hurt dissipated, like petals in the wind.