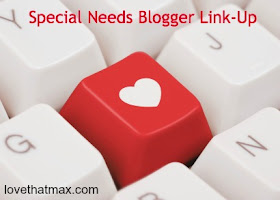 WAIT A SEC! BEFORE YOU LINK, READ THIS!

Before we get to the Special Needs Blogger Weekend Link-up, I wanted to share an email I got yesterday. We all put a lot into our blogs, in the hopes of spreading awareness about our kids (and doing the occasional vent-a-thon, of course). I'm so proud of the impact our special needs blogging community is having.


I came across your blog some time ago while reading an article in SFGate.com, I think. It has been some years. Just wanted to drop you a note to say that yesterday my husband and I were at a restaurant (Outback Steakhouse) and there was a family that came in with a teenage girl.

Nothing really caught my attention about her with the exception that she did have some tightness in her arms but no biggie. I am a nurse and so I am used to pretty much everything not really drawing my attention. They sat across from us, parents of the girl and another couple with them. Across the restaurant another family was with their very young baby who had been crying and fussy the whole time. It is a family restaurant so of course no big deal. The young teenage girl began to get visibly distraught and starting to scream "NO!" at the top of her lungs and "stop crying" about the baby. The parents immediately got up, took her outside and were speaking with her. She was seen putting on her headphones and walking back in to the table.

This is where it gets interesting. The other table's father, with the baby in his arms, comes up and confronts the parents. He stated that he was about to take the baby outside "THANK YOU VERY MUCH! People like you make it hard to bring babies to any place!!!" Then proceeded to storm off. To their credit the other parents of the teenager said nothing and sat down. They looked defeated. I felt really bad for them and I vowed to buy them a dessert and leave them a note.

The server of the restaurant is really the hero here. She witnessed the whole scene from afar and was gone for a few minutes then emerged with her manager. She spoke with the table briefly with the teenage daughter for a time and they seemed genuinely  happy with that conversation. Then they went over to the other table and spoke with them for a time.

Here is the kicker! That table was asked to leave!!!! For confronting other guests in the restaurant and causing a disturbance and making another table feel threatened. (Apparently, the table next to crying baby had kids and felt unsafe; so they took their food home and paid instead of staying and eating! And they told the manager it was the baby's father's fault, not the teenage girl's!)

The baby's family made a huge fuss of course, but when they left a few tables clapped!!!

That server was also our server and I asked her what happened and she said her brother is autistic  with CP and has sensory issues and she reads your blog!!! I said I do, too! Wow! She said that she was very incensed that the other table had the gall to confront anyone about a child and obviously, he would not like anyone to confront him.

The manager bought the teenage family's meal and also bought us a dessert. The grandmother of the baby said that kids like the teenage girl shouldn't be allowed to eat out!! The manager said the same could be said of crying babies. hahah!

SO thanks to you and Max for making us more aware of issues that children face.

And now, the link-up. You know what to do:

Like this: Love That Max: I rocked my school concert, watch out, Springsteen

Click "Enter." Leave a comment if you want to say more. Go check out some great posts.