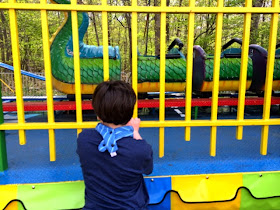 Max and I hit a carnival the other day; the morning was free for kids and adults with disabilities. For two hours, they could go on all the rides they wanted to. Only Max didn't want to go on any of the rides.

I'd had a feeling that's what would happen, and I was fine with it. It used to be that when Max didn't want to do kid stuff like go on rides, hop on a pony at the zoo, see a movie or hang out at a birthday party, I'd feel so badly that he was missing out. I was already despondent over the ways he was lagging behind developmentally. Didn't he deserve his full share of joy?

But Max has taught me a new meaning of childhood happiness. There is no one-size-fits-all variety. Really, it's whatever thrills your kid—going through a car wash, driving by a house with a purple door, eleventy billion pieces of Lightning McQueen merchandise. Or, at times, just walking around and taking everything in.

Max tends to like places he's used to. He enjoys the rides in an area we visit down at the Jersey Shore; new ones, not so much. So we did a few laps around the fair. Max stood for a while in front of a roller coaster, watching it and giggling. Then we bumped into my friend Peggy and her son Mikey, whom Max adores; they do a weekend program together. That made him more comfortable because afterward, Max walked up to a motorcycle ride. There was nobody else on it. "Do you want to go on?" I asked. "No!" he said and walked away. He paused, turned around and went back. He said he wanted to go on. He picked out a motorcycle. We walked over to it. He changed his mind, and we left.

The me of Max's younger days would have been bummed out and anxious. Today's me was happy that Max was curious, and not afraid of being there.

We played that game where you shoot a stream of water into a clown's mouth to make balloons go up, and he won. He said hello to a couple of adults from a group home who were standing nearby. "I'm Juliana, don't you forget it!" one woman told us. "OK!" said Max.

We returned to the motorcycle ride. "Max, you want to go on? Really?" I asked. "Eeely!" he said. The guy at the gate looked dubious. "Eeely!" Max said, nodding.

He headed over to a purple motorcycle. He let me lift him into it. He pointed to the front seat, only parents weren't allowed on. So off he went. He looked nervous the first time he came around. By the next round, he seemed more content. And then, he was gleeful.

He rode it five times. Even if he hadn't gone on it, though, it would have been a Good Day. 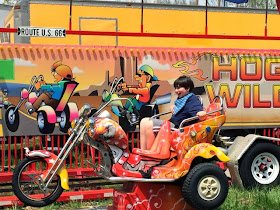