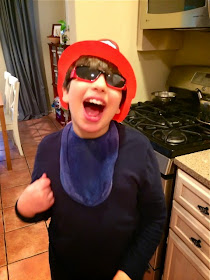 Last week, I passed a van as I was driving that had "Invalid Coach" in big letters on the side. I didn't think anyone used that word anymore, but I guess some older associations and companies do. (Disabled Feminists has an interesting discussion about it.) A shadowy figure in a wheelchair sat inside, and I felt awful for that person to be driven around in a vehicle with that label.

It's always a shock to the system to see antiquated ways of describing—and treating—people with disabilities. The world has a long way to go in terms of acceptance, inclusion and viewing people with disabilities as people and sometimes I get frustrated, as I did this weekend when that mom on the street glared at Max. But at times, I'm reminded of how far things have come and how lucky Max is to be living now, instead of decades ago.

It happened again on Monday, when I picked Max up from school and took him to see an ENT. He's been stuffy lately and one of his speech therapists recommended it. Max no longer gets fazed about seeing doctors, and he compliantly sat in the waiting room till he was called in although he did ask the nurse to refer to him as "fireman." When the nurse finally announced "You're next, fireman!" Max flashed her a grin and trotted into the exam room.

The doctor, a soft-spoken man who appeared to be in his late sixties, looked Max over.

"It's like a flashlight, to look into your nose," the doctor explained.

"If you don't mind, could you refer to him as 'fireman?'" I asked, sheepishly. At which point Max jumped up from the chair, walked over to his backpack, pulled out his iPad and navigated to the speech app where he'd typed "I want to be a fireman when I grow up." He pressed a button and the iPad spoke the words.

"He wrote that?" the doctor asked, incredulously.

"Fireman, please tell him how old you are."

Max typed "11" and the doctor nodded.

Happily, Max's tonsils and adenoids are fine. The doctor extracted a hardened ball of wax from one ear the size of a pea (I'm not exaggerating) and Max was fascinated.

"What did he say?" the doctor asked.

"Ahhh, he has a sense of humor!" the doctor said. No kidding! I realized he was viewing Max through sepia-colored glasses. He'd been raised and trained at a time when people with disabilities were thought to be lesser human beings, and although he's an excellent doctor, he didn't seem to have evolved past that mindset.

It made me glad for the many doctors Max sees who did get the memo about people with disabilities. Max is lucky to live in a time (and an area) where we have a choice of MDs. He's lucky that there are good therapy options. He's lucky to have insurance coverage that by law cannot exclude people with pre-existing conditions like cerebral palsy. He's lucky to have technology that enables him to express what's on his mind, and his firefighter intentions.

I don't sit around thinking about this much, particularly because I don't have much free time to a) sit around or b) think. But when I do, when an incident forces me to realize how lucky Max is, it gives me a lift. It balances out those disheartening times when I feel like I'm climbing mountains to get others to accept Max for who he is.

I'm sure people in my life think it's unlucky that I had a child with disabilities. I don't, though I don't think Max's stroke at birth was a stroke of luck. Earlier in the waiting room, I'd filled out paperwork, and my heart lurched when I got to one question on the medical history form: "Have you ever had a stroke?" I checked off "Yes." I know now that stroke affects about one in 4000 newborns. Max was one of them.

Yet again, there's luck, because Max is doing so much better than the doctors thought he would and he continues to make good progress. This is because of excellent doctors, therapists and teachers along with mine and Dave's efforts, yes, but there's a lot of luck in terms of how Max's brain functions despite the damage. We're also lucky that Max's seizures are under control and that he's physically healthy. And we're so lucky that he has such a cheerful disposition.

And I'm one lucky mom.