When kids with special needs know their limitations...and don't care 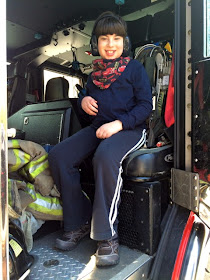 Know your limitations, the saying goes. When it comes to kids with special needs, one question is whether they are aware of their limitations. I've wondered that about Max. He knows he has cerebral palsy. But he doesn't ever make much of it because to him, well, he's just Max. I know now that he has a sense of his challenges because of what happened this weekend.

First, I tried to take him to a local adaptive softball league for the first time. The field was wet from rain, and so the practice session was held indoors at a gym. Max had his headphones on but there was such a din that he dashed out of there within maybe three minutes, vehemently shaking his head. Mommy tortured me, once again, he was probably thinking. And: Can I sue her for that?

In the ride back home, Max and I talked about how he might be game to try softball again when it was outdoors. I wanted to make up for his sensory shakeup, so I suggested we stop by our local fire department. Lately, Max has been telling me that he wants to be a fireman when he grows up. I knew it would be a treat for him.

Firefighter David was the first to greet us and invite us inside. He gave us the lay of the land, and several times Max "What's that?", his new favorite phrase. Then he offered to let Max sit in one of the fire trucks. "Buddy, let me help you up here," he said, throwing open the driver side door. But no: Max wanted to sit in the backseat. He informed us both that when he grows up and he is a fireman, he is always going to sit in the back seat.

I wondered whether it was because he did not think he would be driving. But if so, I also wondered just how he was planning on putting out fires when he arrived on the scene. Holding things, like spoons and toys, doesn't come so easy to him. Holding a gigantic water hose? Um, not one of his superpowers, at least now, anyway.

Then Firefighter Angelo came downstairs, and they were each other's new BFFs. He took Max and me upstairs to the department's private quarters, where they eat, sleep and hang out. Max chose the bed he was going to sleep in, conveniently located in front of the TV. Fireman Angelo gave him a fireman's cap. 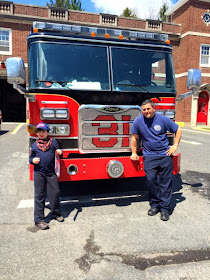 Max also chose his chair in the dining area, and explained that he would be cooking macaroni and cheese to eat. He noticed some big, red alarm bells and noted that they would be loud. He looked in fascination at a sliding pole (they still use one at our station) and squealed when Fireman Angelo slid down. And would Max want to help wash the ambulance? OH YES YES YES YES YES. A dream come true: Washing cars at the firehouse. 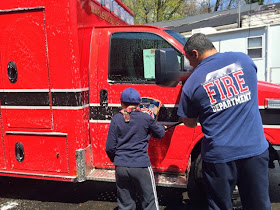 I had a heck of a time getting Max out of there, but told him we could bake the firemen cookies as a thank you and return. And wouldn't you know it, he wanted to do it the second we got home. So we popped in some of those Lightning McQueen sugar cookies.

Then Max grabbed my hand and led me out our front door, where he pointed to some windows on the first floor. He made a motion like he was washing them, and I really wasn't sure what he was saying at first. Then I realized.

"Max, are you saying that when you are a fireman, you are going to help people on the first floor by putting out the fire there?"

And I knew then: He figured that he wouldn't be able to get up a ladder, so he'd stick with the first floor. And I loved that he was thinking like that.

"And how are you going to hold the hose?" I asked.

He gave me a look and held out his hands. As in: DUH, MOM! I will use my hands!

And I so loved that.

"Know your limitations, then defy them" is another phrase I've heard. I'm not saying Max could grow up to be a fireman. But perhaps there will be some less active role he could take on. Really, who knows what possibilities the future holds? For now, I love that he is thinking this all through. This boy's got career plans!

Then again, in a few weeks Max might wake up and decide he wants to be a teacher (he absolutely adores his current one), or a chef like the ones on the Food Network or heck, maybe he'd like to be a mountaineer and hike Kilimanjaro. I think that would be a great Daddy and me trip.

Oh, and FYI, Max would like to be referred to as Fireman Max.