On knowing when to not be the mama warrior 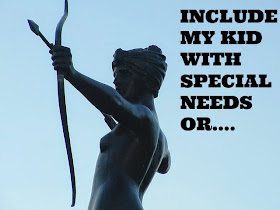 When you've parented a kid with special needs for years, you have warrior blood running through your veins. The kind it takes to advocate for your kid, fight for what he needs and, as necessary, raise hell. Over time, though, you realize that you have to pick your battles, because you only have a finite amount of time and energy.

And sometimes, you might learn that you are looking to fight when you shouldn't be, as happened recently.

I've had it in my head for awhile that I'd like Max to have an inclusionary camp experience. Max is in a school for kids with special needs year round. I'd like him to expand his horizons, and get a sense of what life in the real world is like with so-called typical kids. Well, the real camp world, anyway.

A teacher I really respect works at a camp that has an inclusion program and sings it praises. I checked the site; the camp is mostly for kids with learning differences and social communication disorders, Aspergers and autism. Still, I figured, it would surely be open to a child with disabilities. She encouraged me to look into it. So, I reached out to the director. During our initial phone call, she  seemed a little hesitant about Max, but she offered to meet up with us at Panera one afternoon.

Max and I got there first, and we grabbed a bowl of chicken soup for him and a table in the back. I was tucking a bunch of napkins into Max's shirt collar when she arrived. (Soup = very messy food for him.)

She greeted me nicely and said a warm "hello" to Max. She watched as I fished the chunks of chicken out of the soup because they're a choking hazard for Max. We talked as Max splashed soup all over his shirt and gave her his occasional charming Max smile. He said a few things, what, I don't recall. I explained the range of Max's needs—that he required assistance getting dressed, bathing and toileting. That he used a speech app to communicate. She said the camp had a few kids with CP.

Then said to me, pointedly, "We have a girl with apraxia at camp, but she speaks in full sentences." I stared at her. I wanted to snap, "And what's your point?" but I held back. I knew exactly what she was getting at: Max does not speak in full sentences and when he does, at times even I have a hard time making out what he's saying.

Then she said that counselors didn't touch children. I agreed that, yes, Max would require an aide to attend the camp. I told her that I liked this camp in particular because it was inclusionary, and that while I knew of camps specifically for kids with special needs, I wanted one where he got to mingle with all sorts of kids.

At the end of our meeting, she wanted to see how Max walked. I couldn't believe she blatantly asked that. Max actually decided he'd had enough and wanted to make a break for the door, so she got a chance to see how Max runs. A little wobbly, but fine.

I left there feeling uneasy, and concerned that I was going to have another battle on my hands. When I emailed her to say thanks for meeting up, I wrote "He is such a social child and I really want him to benefit from an inclusionary experience. I feel there must be a way for this to happen."

When she emailed that she was looking into another program for Max I responded, "Just so I'm clear, you believe that your camp cannot accommodate Max?" and she wrote back the camp "would not be a good fit for Max." She said she'd be happy to help in any way she could, and to let her know if I found a "suitable" program for Max.

I didn't doubt her sincerity. But I was upset, and miffed.

I kept thinking and thinking about that meeting in Panera. I wanted to call that director and tell her my son had a right to be at the camp, even though he would have needed an aide. Then I Googled to see whether her turning away Max violated the Americans with Disabilities Act, the law that prohibits discrimination against people with disabilities. It actually didn't.

Title III of the ADA protects disabled Americans from discrimination in places of public accommodations, like buildings and swimming pools. But religious institutions are exempt from Title III, and the camp I was looking into is run by a religious entity. Otherwise, many camps do fall under the ADA, including private ones and public ones such as those run by the YMCA. I read about a lawsuit in which a Connecticut town was required to provide diabetes management for kids attending the recreational department's summer camp.

Still: Excluding my kid with special needs from a camp for kids with special needs just seemed so wrong. I found that camp director guilty, in the ethical and moral court of my mind. One of the things I want most in this world is for Max to experience as much of it as he can. I feel it's my mission to make that happen for him, however I can. If I don't, who will? I'm driven by that passion, and fueled by love. And iced coffee.

The days went by, then weeks. I Googled around more and found that many sleepaway camps specialize in types of special needs, and that it was less common to find camps that accepted kids with special needs of all kinds. I had to admit that made sense. Special needs aren't one size fit all, and a camp not used to accommodating kids with physical needs like Max might not be the best fit for him. That camp director carried through on her promise and connected me with a program that works with kids like Max. It's not going to happen this summer, but maybe the next; it seems promising.

I condemned that camp director all too soon. For now, I have options, and I'm going to explore them. There's a time to push for special needs services and inclusion, and make sure your child with special needs gets what he needs. And there's a time to accept that what you hoped for may not work out and pursue other possibilities. Us special needs mama warriors need to know the difference, if for no other reason than to keep ourselves sane.