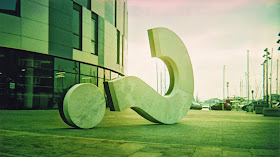 "What's that?" Max asks. We're at a restaurant that's handing out balloons to kids, and he just watched a woman fill a purple one with helium. Now he wants to know about the device she used.

"The machine blows air into the balloon so it can float," I tell Max. "It's a special kind of air called helium, not like the kind of air you blow from your mouth."

He seems satisfied with the explanation. Me, I'm thrilled that he asked.

"What's that?" is a relatively new Max phrase. It's not just his ability to articulate the words that excites me—it's that he's asking, period. Intellectual curiosity starts when kids are young, but as a tot Max didn't exhibit a whole lot of it. Perhaps that's because most of his energies were focused on physical development, including crawling, toddling and using his hands and fingers. He also wasn't all that able to express himself, period: He had a Dynavox as a speech device, but it was a clunker and not easy for him to use.

Once Max got an iPad, we programmed questions into it. But it wasn't until he was 9 that he started articulating questions, beginning with "Today?" (As in, "Are we going to Disneyland today?") That's still a favorite one. But lately, all he wants to know is "What's that?" It sounds like "Wha eh?" and I have to translate for people.

"What's that?" he asked when he was looking at my nightstand the other day and spotted a little night light you clip onto books.

"What's that?" he asked when we were at an ice-skating rink and a Zamboni came out.

"What's that?" he asked as I downed cottage cheese straight out of the container the other day, because I am reckless that way.

"What's that?" he asked, pointing to a Target gift card I was holding.

"What's that?" he asked when Sabrina was working on an invention she's creating for a school project.

"What's that?" he asked about the bug trap we put by the back door following The Invasion of the Ants.

"What's that?" he asked, pointing to the roll of fat on my stomach as I stepped out of the shower. (Clearly I need to eat more cottage cheese and less pasta.) (Or at least lock the bathroom door.)

Blubber belly incident aside, I am fascinated by this new stage in his cognitive development. With Sabrina, I never had any doubts. But Max's mind growth is one of the joys of special needs parenting. It's exciting, because his world is opening up. It's astounding, because I know just what his brain endured at birth. And it's payback for the early years, when the "What will he be able to do?" worries consumed me.

I still don't know the answer. And that's a good thing.