When special needs moms know better than the experts do 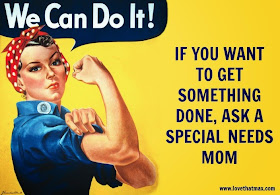 "The speech therapist said because of his lack of comprehension, he wasn't yet ready for a speech device," a mom I recently met told me. Her five-year-old son has developmental delays, and is nonverbal. He was sitting nearby, poking around on an iPhone.

"Have they tried one with him?" I asked.

Clearly, this child was into technology. Earlier, I'd seen him playing with an iPad.

"You should press the therapist on that," I said. "These days, you can simplify devices and speech apps so they work for kids at a really basic level of communication, just even saying 'yes' or 'no.'"

In a second, I was flashing back to the time when Max was 5 and I told the head of the speech department at his old school that I thought he should try a speech device.

"How do you know if you've never even tried one with him?" I asked.

Dave and I ended up getting Max evaluated for an augmentative communication device, and those experts decided he was ready for one. He got a Dynavox; it cost close to $2000 and the district paid for it. This was before the iPad came along, and that thing was a clunker. Max couldn't even pick it up. I hated programming it. Still, for the first time Max had a voice—and it was because I, Mommy Expert, said so.

Soon after, I pulled Max out of that school. I'd long felt they weren't progressive enough and the resistance to the speech device was the last straw.

If there's one thing parents of kids with special needs know, it's that we need experts—many, many experts—to help our children. And if there's another thing we know, it's that the experts aren't always right.

That speech therapist was operating out of ignorance. She didn't have experience with communication devices, which she eventually admitted. Still: One of the benchmarks of a good therapist or teacher is being open to change, along with parental input. And while it shouldn't be our jobs to push the experts to be more innovative, sometimes we have to.

Over the years, I've heard from parents who thought their speech, occupational and physical therapists weren't adequately engaging their kids. I usually ask the same questions:

1) Have you said anything?
2) Have you made suggestions about what would improve things?
3) Do you have another therapist you can switch to?

Experts know their stuff. But parents know their kids best of all. And even though it's tricky to tell when something isn't right because, after all, they are the experts and they have their degrees, you need to trust your gut. And feel comfortable speaking up, too, though I know that's not always easy, either. Ultimately, we are our kids' best advocates. I grew into it over time, but I knew it from the first weeks of Max's life.

The doom-and-gloom pediatric neurologist had left me despondent about Max's future, and I told the NICU social worker that I didn't want to talk with him again unless he could find something, anything positive to say. As bewildered as I was by what had happened and by this new medical world I was navigating, I realized that I needed some hope to hang on to for Max's sake.

"What good will it do Max if I'm a mess?" I said to that social worker. "That doctor needs to stop depressing me more than I already am."

"You're going to be a great champion for your son," she told me the day we left the hospital with Max.

We are all champions for our children. And when an expert's behavior is wearing us down, when we hear "No" or "Not possible" or "Not ready," it's time to question, push and persevere.