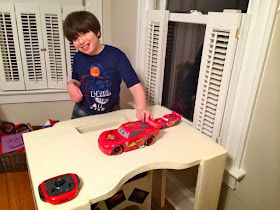 Today is National Cerebral Palsy Awareness Day 2014. A day I most likely wouldn't be aware of if I didn't have a child with cerebral palsy. But I've got Max, amazing Max. And I've got you reading this. And if you are not a parent of a kid with CP, I would so love for you to understand some of the things I never knew until I had Max. More knowledge means greater understanding—and less pity.

1. Cerebral palsy is not a disease.
Cerebral palsy isn't a birth defect, either. It is not something you can catch. It is a movement disorder, the result of abnormal brain development or brain damage that typically happens in utero or during birth. Max had a stroke—his brain lost oxygen at birth—which is how we believe he ended up with CP. The causes of CP remain largely a mystery, though there is groundbreaking new research about genetic mutations linked to it and a Cerebral Palsy Genetics Collaborative Network working to gather research on it.


2. Cerebral palsy isn't so rare.
It's the most common motor disability in kids, affecting about 3 in every 1000 children. Kids typically aren't diagnosed until ages two or three. There's no definitive test for it; doctors base a diagnosis on development, observation, parental input and sometimes, an MRI.

3. There are different kinds of cerebral palsy.
The term "cerebral palsy" describes a group of movement disorders. They include spastic cerebral palsy (the most common kind), which means muscles are often stiff; athetoid cerebral palsy, which causes slow and writhing movements or fast and jerky ones; and ataxic cerebral palsy, which mainly causes issues with coordination. People can have mixed forms. Spastic CP is further categorized by which body parts are affected: Diplegic CP affects symmetrical parts of the body, often the legs; quadriplegic CP affects all four limbs; hemiplegia affects one side of the body, from arms to legs; and monoplegia affects one limb, often an arm. Max has spastic four-quad CP, with his arms and hands more affected than his legs.

5. Cerebral palsy can mess with muscles big and small.
When Max started drinking from a bottle as a baby, he had issues retaining the milk. That's when I first learned that CP (although he wasn't officially diagnosed with it till he was two) can affect your oral motor control, including swallowing. In fact, it takes about fifty pairs of muscles to move food around your mouth, chew it and get it to the stomach. Your body has hundreds and hundreds of muscles. Every single one of them moves because your brain shoots them signals to do so. Cerebral palsy affects the signals your brain sends to muscles, so they don't always work the way they're supposed to. (This is why I was in awe of Max figuring out how to wink, a relatively minuscule muscle movement.)

6. Cerebral palsy can make muscles tight or loose.
Max's muscles tend to be on the stiff side because he has high muscle tone; there's a lot of tension, especially in his arms and hands (massage helps). Some kids with CP have low muscle tone, and tend to be "floppy." Again, it's all about where the brain damage is and the extent of it. Max used to fist his hands all the time when he was a baby. His fingers have loosened up over the years—he even got Botox injections in the area to help (sadly, they weren't offering stressed-out mothers any discounts). Still, his thumb is usually pressed up against his pointer finger, as if it's glued to it. As you can imagine, this makes picking up objects a little tricky (try it), although Max perseveres and grasps stuff as best he can. Sometimes at night I go into his room while he's sleeping and hold his hands, marveling at how loose they feel when his body is totally relaxed.

7. Cerebral palsy can be different every day.
When Max is cold, his muscle tend to be more stiff, exactly why he should be regularly vacationing in tropical islands. When he's excited or nervous, his muscles also tense up. I used to wonder whether it hurt him until he was finally able to express to me whether or not something pains him and so far, so good, although muscle aches can be an issue for kids and adults with CP.

8. There is no cure for cerebral palsy.
There is a shocking lack of research about cerebral palsy—and a lack of funding for it (and if you care to write your Congressional reps about that, pleasepleaseplease, find their contact info here). In the meantime, there are effective therapies out there to ease symptoms and enable kids with cerebral palsy achieve their potential: speech therapy, occupational therapy (to help with fine-motor skills like picking things up or grasping a ball), physical therapy (to help with gross-motor skills, including standing, crawling and walking) and feeding therapy. Kids can get therapy in pools (aquatic therapy) or even while on horseback (hippotherapy). There's a range of alternative therapies, too; as a baby, Max got hyperbaric oxygen treatment. When he was six, he got a stem cell transfusion. Dave and I have a motto: If it can't hurt and it might help, we'll do it. Some children with CP wear braces on their feet to help them better move, as Max does. Sometimes, their feet get casted to prevent them from turning inward or outward. Kids with severe spasticity in their lower limbs may need surgical procedures to ease muscle tone.

9. Cerebral palsy doesn't disable your personality.
Max's spirit isn't disabled. Neither is his personality, his disposition or who he is at heart. People just need to look past the physical disabilities to see the person in there. Same goes for adults. And with that, I bring you comedian Maysoon Zayid and her recent TEDTalk I Got 99 problems...Palsy Is Just One.


10. You shouldn't feel bad for people with cerebral palsy.
Max may have more challenges than other kids, and more visible ones at that, but he takes them in stride because cerebral palsy is part of who he is. He's not sitting around feeling sorry for himself—all he knows is to be himself. So please, don't bring him down with pity; treat him like you treat any other kid. Though by all means, if you'd like to take him (and me!) on a tropical vacation, just let us know.